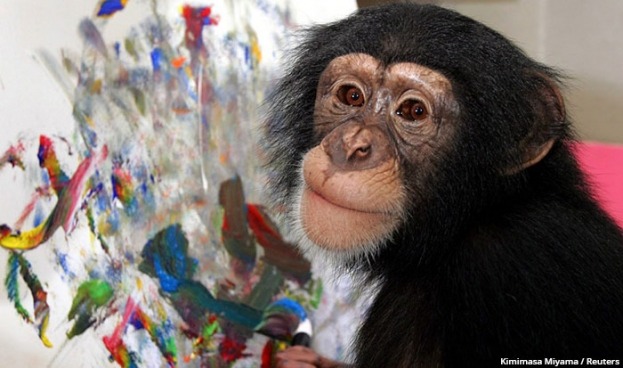 Posted by Frederic and Mary Ann Brussat on April 4, 2016

After working with chimpanzees for 55 years in Gombe, Tanzania, Jane Goodall says that some of their behavior is "perhaps triggered by feelings of awe and wonder" for magnificent natural features or events. She continues that chimpanzees are so similar to us, "Why wouldn't they also have feelings of some kind of spirituality?"

Put this observation beside those in a paper published in Nature from the Max Planck Institute for Evolutionary Anthropology in Leipzig where a group of 80 scientists raised the possibility that "chimpanzees at four field sites in west Africa may perform a ritual when they repeatedly throw stones at trees in the forest." Later, Laura Kehoe, one of the scientists, observed: "Maybe we found the first evidence of chimpanzees creating a kind of shrine that could indicate sacred trees."

Whereas this paper in Nature has set off a firestorm of controversy among scientists, Barbara J. King, the author of "Seeing Spirituality in Chimpanzees" in TheAtlantic.com, adds new input with a mini-review of Religious Affects: Animality, Evolution, and Power by Donovan Schaefer. He affirms that the embodied and emotional practices of animals are a sign that they have religion which is further expressed through reverence.

More agreement with Goodall comes from Frans de Waal in his upcoming book Are We Smart Enough to Know How Smart Animals Are? Its message, reports King, is that "we must keep an open mind about what our closest living relatives can and cannot do, because often they will surprise us."

Are animals spiritual? Black Elk tells us to pay attention to even the smallest crawling creature, who has a valuable lesson to teach us. Mechthild of Magdeburg believes that the truly wise person kneels at the feet of all creatures. St Francis addressed animals as brothers and sisters. Spiders, according to Edward Hays, help us to discover our place in the universe. Maggid of Mezritch took his disciples to a pond to learn the song with which frogs praise God. We see our cats as spiritual teachers who have taught us how to live a rhythmic life and to savor the present moment. And last but not least, check out the spiritual practice in this haiku by Issa:

"The flies in the temple
imitate the hands
of the people with prayer beads."