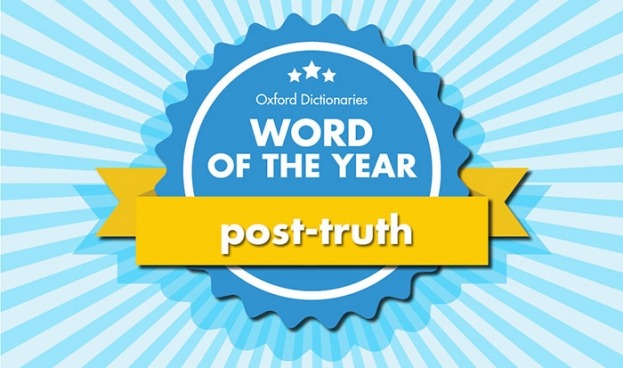 The International Word of the Year

Posted by Frederic Brussat on November 30, 2016

Oxford Dictionaries has chosen "post-truth" as its international word of 2016. It is an adjective "relating to or denoting circumstances in which objective facts are less influential in shaping public opinion than appeals to emotion and personal belief." The spike in its usage is "in the context of the European Union referendum in the United Kingdom and the presidential election in the United States."

The runner up for the title, according to Alison Flood's article in www.the guardian.com was the noun "alt-right": a shortened form of "alternative right" and defined as "an ideological grouping associated with extreme conservative or reactionary viewpoints, characterized by a rejection of mainstream politics and by the use of online media to disseminate deliberately controversial content."

The other contenders for international word of the year included:

Adulting: noun, meaning "the practice of behaving in a way characteristic of a responsible adult, especially the accomplishment of mundane but necessary tasks."

Hygge: noun, meaning "a quality of cosiness and comfortable conviviality that engenders a feeling of contentment or wellbeing."