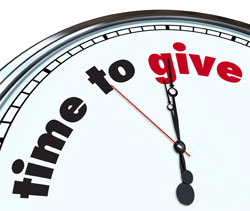 We believe that the spiritual practice of generosity pulls out the spaces that separate people from each other. Many of the world's religions see it as the "mother of kindness." Buddha named generosity as the first of 10 qualities of the perfected mind. The art of serving and giving to others is its own reward.

An interdisciplinary team of faculty working with Arizona State University's Center for the Study of Religion and Conflict are exploring what animates Catholics and Muslims in Dublin, Milan, Paris, and Istanbul to be charitable to others. Does it stem from a sense of religious duty, a love of God or Jesus, or their feelings of being blessed and wanting to share with others?

Reporting on the study Julie Newberg of the University of Notre Dame finds certain commonalities in the generosity of both Catholics and Muslims, such as the benefits of actually connecting with the people you are helping; for example, while serving food at a soup kitchen, actually sitting down and eating with someone who is living on the streets. Naturally officials from the religions were interested in finding out more about the spiritual practice of generosity among their members.

Here from our Quotes Database are two further thoughts about generosity:


"The Prophet Muhammad said, 'the best of my people will enter paradise not because of their achievements, but because of the Mercy of God and their being satisfied with little for themselves and their extreme generosity toward others.' "