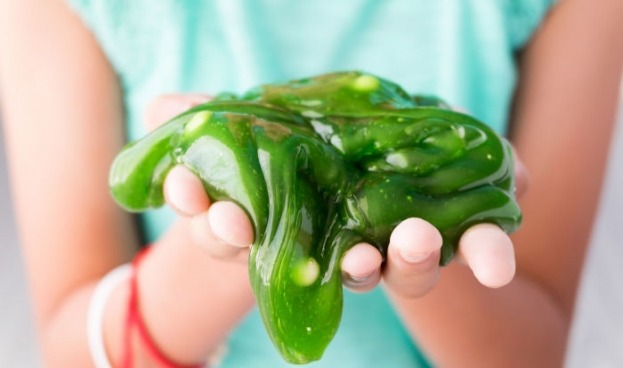 Posted by Frederic and Mary Ann Brussat on October 16, 2019

We were introduced to the wonders and pleasures of slime when we visited the home of Elizabeth and Olivia, a friend's granddaughters. As videos of people shaping slime played on the TV set, they gave us a first-hand (and fingers) experience with it.

Slime is a long-lasting fad that shows no signs of fading away. In an article in The New York Times titled "It's Slime. And Satisfying," Amanda Hess writes: "Slime is an art form, a community and an industry: sensory gratification tubbed and sold. From mundane household material — laundry detergent, glitter, glue — springs an exotic material."

As we listened carefully, Elizabeth and Olivia explained how they had made their own slime and what extras (coloring, glitter, beads) they had added to the basic recipe in order to make different kinds. We wondered if they would have the same enthusiasm baking or cooking a meal. Clearly, they were proud of all the types of slime they had in various sized containers.

They went on to fill us in on all the things that they could do with slime — some silly, some surprising, and some hard to believe. The sisters were obviously enjoying the chance to tell their own stories. We were silent students as they handed us the gooey stuff, encouraging us to notice the different consistencies and how each batch could be pulled, folded over, punched into, squeezed, and formed into shapes. We were told to notice how some batches were silky and others almost tough to shape. We were even allowed to fold in some beads ourselves to change the feel of a batch.

Slime provides many sensory delights and we wondered if this is the main source of its appeal. But there is more to it. It's a generational thing (think late elementary and middle school girls), and part of its appeal may be that adults just don't get its appeal. It's also sanctioned touch in a time when so many kinds of touch are forbidden.

And it's fun. After our afternoon with slime, we had to admit we felt . . . well, enriched by the experience. After all, play is a spiritual practice.