By John Bookser Feister, Richard Rohr
Richard Rohr on Jesus and the way he transformed darkness.

Richard Rohr, a Franciscan priest and prolific author, has written a compelling book about the transformative message of the crucified Jesus to a world convulsed by confusion. Here is a powerful passage on the spiritual practice of shadow.

"Most Christians, with utter irony, worshipped Jesus the Scapegoat on Sundays and made scapegoats of Jews, Moslems, other Christian denominations, heretics, sinners, pagans, the poor and almost anybody who was not like them the other six days of the week. One would have thought that Christians who 'gazed upon the one they had pierced' would have gotten the message about how wrong domination, power and hatred can be. The system had been utterly wrong about their own, chosen God figure, yet they continued to trust the system. I guess they did not gaze long enough. . . .

"The absolute religious genius of Jesus is that he utterly refuses all debt codes, purity codes, religious quarantines and the searching for sinners. He refuses the very starting point of historic religion. He refuses to divide the world into the pure and the impure, much to the chagrin of almost everybody — then and now.

"Jesus is shockingly not upset with sinners, a shock so total that most Christians to this day refuse to see it. He is only upset with people who do not think they are sinners: These denying, fearful and illusory ones are the blockage. They are much more likely to hate and feel no compunction. Formerly, religion thought its mission was to 'expel sin and evil from River City.' After Jesus we find out that sin lies in the very act of expelling. There is no place to expel it to. We have met the enemy, and the enemy is us. We either carry and transform the evil of human history as our own problem, or we only increase its efficiency and power by hating and punishing it 'over there.' The Jesus pattern was put precisely and concisely by Saint Paul: 'for our sake he made the sinless one a victim for sin, so that in him we might become the uprightness of God' (2 Corinthians 5:21). I admit, that is heavy stuff. Only the mystics and the sinners seem to get it." 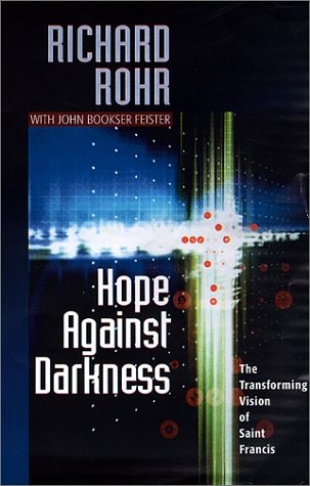