"In the modern period, Christians have often emphasized believing in the Bible. I conclude this chapter with three metaphors, all suggesting a very different way of seeing the relationship between Christians and the Bible.

"The first metaphor comes from the Buddhist tradition. Buddhists often speak of the teaching of the Buddha as 'a finger pointing to the moon.' The metaphor helps guard against the mistake of thinking that being a Buddhist means believing in Buddhist teaching--that is, believing in the finger. As the metaphor implies, one is to see (and pay attention to) that to which the finger points.

"To apply the metaphor to the Bible, the Bible is like a finger pointing to the moon. Christians sometimes make the mistake of thinking that being a Christian is about believing in the finger rather than seeing the Christian life as a relationship to that which the finger points.

"Until now, I have been speaking about the lens through which we see the Bible. Now I am applying the lens metaphor to the Bible itself: the Bible is a lens. I owe this use of the metaphor to a student who a few years ago took my introductory-level course on the Bible. About two weeks into the term, he said to me, 'I think I am beginning to get it. You're saying that the Bible is like a lens through which we see God, but some people think it's important to believe in the lens.'

"His simple statement has stayed with me. The point, of course, is the same as the finger metaphor: there is a crucial difference between believing in the lens and using the lens as a way of seeing that which is beyond the lens.

"For my final metaphor, I return to the Bible as sacrament. Now, though, I extend the metaphor so that it includes the Christian tradition as a whole: the Bible as well as Christian creeds, liturgies, rituals, practices, music, art, and so forth. When one sees Christianity as a sacrament of the sacred, being Christian is not about believing in Christianity. That would be like believing in the bread and wine of the eucharist rather than letting the bread and the wine do their sacramental work of mediating the presence of Christ. It would be like believing in the finger or the lens. 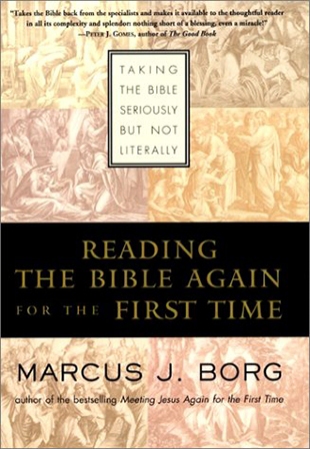