By Harvey Cox
Harvey Cox on Jesus and his views of peace.

Harvey Cox in When Jesus Came to Harvard
"Despite all the efforts to shrink the scope of their application, the Beatitudes (and the woes) continue to nurture the troubled consciences of millions of people."

"Blessed are the peacemakers, for they shall be called the children of God."

"This is one of the parts of the Sermon on the Mount many people know, and most of the students in my class had heard it before the course. They had also heard that Jesus was often called the Prince of Peace, and they had undoubtedly sung or at least heard Christmas carols about 'peace on earth, goodwill to men.' But they did not know what to make of this curious blessing of the peace-makers. Whom, exactly, did Jesus mean? The slogan posted outside an Air Force base I once drove by proclaimed, 'Peace is Our Business.' What kind of peace did Jesus have in mind? How does one go about being a peacemaker? It seemed like a nice idea, but quite vague.

"Actually, at the time he said them, Jesus' words were anything but ambiguous. They were a direct challenge to the ruling Roman ideology. Like other words he uttered that might sound innocuous today, this blessing was a taunt hurled at the foreign rulers of his homeland and their domestic supporters. The empire's main claim to fame and legitimacy was that Rome and Rome alone was the peacemaker. It sustained a pax romana under the magnanimous auspices of Caesar, a divine ruler. One of the imperial titles of the divine Augustus was that of 'peace-bringer.' The legions were the makers and guarantors of this peace, and it was something for which its subjected peoples were to be supremely grateful — and happily cough up their exorbitant taxes. So, given such an ostensibly benevolent state of affairs, just who was this upstart rabbi from the outland who was going about the country suggesting that a new empire was about to be instituted in which God and not Caesar would be the ruler? And who was he to claim that his scruffy followers, not the armed forces of Rome, were the real peacemakers?

"The Romans had mastered the art of talking about peace while waging almost constant war, always — of course — in the interest of preserving their pax. They littered the landscape with temples to peace and inscriptions about peace at the same moment their regiments were crushing rebellions and slashing their way to more and more conquests. But the peace Rabbi Jesus was talking about and demonstrating was shalom, not pax. It was not the peace that was brutally enforced in the emperor's name; it was the peace that is a gift of God. It did not come from the top down but from the bottom up. It was not a peace marked by the jittery comfort of the gentry and the resentful passivity of those it dispossessed. It was the shalom of which the prophets had sung, in which every man would sit under his own fig tree and there would be no more poor in the land. It was peace among persons, between peoples, and between humankind and the natural world.

"There can be little doubt that this is a demanding vision. No wonder interpreters for centuries have found ways to dismiss it. One device, favored by Martin Luther, among others, was to teach that the Sermon on the Mount described how Christians should act in their personal relations with their families and friends and neighbors, But, the great rReformer insisted, to try to apply it to the public realm was to defy the structures God had ordained to impose order on civic life. It was to undercut the responsibility of the magistrate who was not only permitted but was also commanded to wield the sword when necessary. The classic Catholic response was that those in "religious life" should be guided by these teachings, but they were not applicable to governance and certainly not to making war when war was called for. But, despite all the efforts to shrink the scope of their application, the Beatitudes (and the woes) continue to nurture the troubled consciences of millions of people." 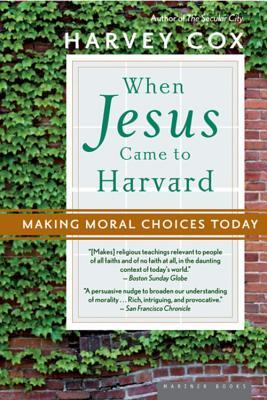