By Jean-Yves LeLoup
Jean-Yves Leloup on the possibility that Jesus experienced full love with a woman.

"The real question is not whether Yeshua was married (again in the formal sense of the word). Why should that be so important? The interesting question is this: Was Yeshua fully human, with a normal human sexuality that was capable of intimacy and preference?

"Again, we invoke the proverb of the sages of early Christianity: 'That which is not lived is not redeemed.' If Yeshua, considered as the Messiah and the Christ (from the Greek Christos, a rendering of the Hebrew Mashiah), did not live his sexuality, then sexuality is unredeemed. In that case, he could not be a Savior in the full sense of the word, this eventually led to the institution of a logic, especially in Western Roman Christianity, that was oriented more to death than to life.

"Thus the very origin of our life in its physical sense, in the image of the Creator, is logically transformed into an instrument of death. Could it be that we Westerners, driven by our collective unconscious guilt, are still suffering the consequences of this logic today?

"The Gospel of Mary, like the Gospels of John and Philip, remind us that Yeshua was capable of intimacy with a woman. This intimacy was not merely of the flesh; it was also emotional, intellectual, and spiritual. What is at stake here is total salvation, the liberation of a human being in his or her entirety, by imbuing all the dimensions of this being with consciousness and love. By invoking the realism of Yeshua's humanity in its sexual dimension, the Gospel of Mary in no way detracts from his spiritual and divine nature, the dimensions of pneuma.

"Mark and Matthew devote more attention to his tears at the plight of Jerusalem, and even his anguish and doubts when faced with death: 'Father, why have you abandoned me? If possible, may this cup be removed from me.' This is another reminder of his transparent humanity through which God is revealed.

"Like the canonical gospels, those of Nag Hammadi summon us to become free with respect to our dualities; otherwise they make us diabolic (diabolos=divider) and tear us apart. We are not summoned to deny matter or the body, but to sanctify these levels by not getting caught up in them and not identifying with them. Like Miriam of Magdala following her Beloved, we are called to learn, through creative imagination, to bring love into those places where it is lacking — which include our stuck and blocked intellect and desire.

"It would seem that Peter did not really understand this teaching any more than it is understood by most of us today. As he said in the Gospel of Mary Magdalene:

" 'Must we change our customs,
and listen to this woman?
Did he really choose her, and prefer her to us?'

"But do not the Hebrew scriptures imply that it is a sign of good health for a man to prefer the company of a woman in intimacy? Is it not also a sign of his real humanity?

"Yet the essential meaning of this goes deeper still. Before we can hope to be spiritual, to live in the pneuma, we must first embrace the level of the soul (psyche), and the body (soma). These psychophysical dimensions are traditionally seen as feminine, and they are the very condition for access to the nous, or masculine dimension of our being." 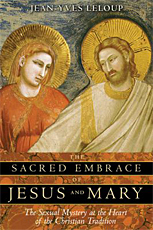