By Richard Rohr
Walter Wink on the spiritual practice of peace and nonviolence.

"Stories of nonviolence are instructive. Millions of years of violence have ill prepared us for nonviolent reactions. We need such stories to stretch our imaginations. We need to rehearse situations that might arise so as to avoid being caught unprepared. When we see how other people were able to rise to the challenge of nonviolent reactions, we are enabled to act creatively as well, but there is another reason to tell these stories. They are, with few exceptions, surprising, interesting, even amazing in their sheer originality. Here are a few of my favorites. Enjoy.

"South African archbishop Desmond Tutu walked by a construction site on a temporary sidewalk the width of one person. A white man appeared at the other end, recognized Tutu, and said, 'I don't make way for gorillas.' At which Tutu stepped aside, made a deep sweeping gesture, and said, 'Ah, yes, but I do.'

"During the struggle of Solidarity in Poland, one group dressed in Santa Claus outfits and distributed scarce sanitary napkins to women as a way of dramatizing the difficulty of obtaining essentials. When these Santas were arrested, other Santas showed up at jail insisting that the others were frauds, that they were the real Santas.

"Chinese students, forbidden to demonstrate against government policy, donned masks of the Communist leadership and carried signs reading: 'Support Martial Law,' 'Support Dictatorship,' 'Support Inflation.' (I especially like this one. It has such suggestive possibilities. How about, for example, 'Give tax breaks to the rich.' Or, 'Collateral damage ain't nothin'.') 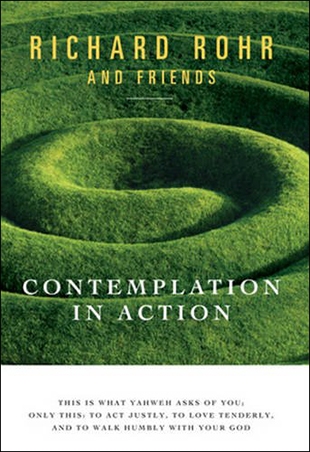