Love, Soul and Freedom Dancing with Rumi on the Mystic Path

By Christopher Largent, Denise Breton
Mystical flow between the visible and invisible.

"Rumi is an interesting mystic because he grew up in a Sufi society. Compared with modern culture, this was a spiritually oriented environment. Not all mystics have had this. To seek the spiritual, many had to step outside cultural institutions and go it alone, sometimes literally living outside town in the woods. That wasn't necessary for Rumi. He was held in the bosom of Sufi institutions and continued to play a role in them until his death. Instead of retreating to a cloister or cave, Rumi started the famous Sufi Order of Whirling Dervishes. He created not only a new community but one that grounds mediation in dance and music — the invisible and visible united. . . .

"Visible and invisible: Rumi seems more interested in the flow between them and less inclined to take flight to unseen realms and from there to disdain or even to throw stones at the visible. Rumi was, after all, called to the deepest mystical insights by things that happened in a visible way." 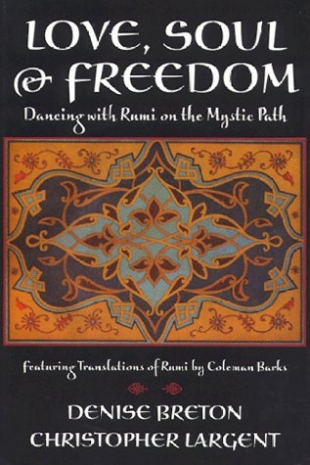