By Jon M. Sweeney
Francis and Clare of Assisi's sensitivity for living and organic things.

"Francis and Clare were a different sort of mystic. They were more like Buddhism's bodhisattvas who simply will not permit themselves the opportunity to soar into these reaches of enlightenment, but rather, set themselves to the task of helping others along their way. We see this again and again in the details of their lives. They exhibited a sensitivity to the living and organic things around them that sets them apart. Francis, for instance, even cared for the inanimate objects of creation with a sensitivity that is similar to Buddhist teachings about kindness toward all sentient beings. In one of his most beautiful paragraphs in The Golden Legend, Jacobus of Voragine explains the following about St. Francis:

" 'The saint would not handle lanterns and candles because he did not want to dim their brightness with his hands. He walked reverently on stones out of respect for him who was called Peter, which means stone. He lifted worms from the road for fear they might be trampled underfoot by passersby. Bees might perish in the cold of winter, so he had honey and fine wines set out for them. He called all animals brothers and sisters. When he looked at the sun, the moon, and the stars, he was filled with inexpressible joy by his love of the Creator and invited them all to love their Creator.'

"The earthiness of early Franciscan love was rooted in the earth itself. Francis and Clare shared a pre-Copernican view of the universe (Nicolaus Copernicus, d. 1543). The pre-Copernican view imagined Earth at the center of the universe and humankind at the center of everything. This perspective permeates much of Christian tradition, including the Psalms and the translators of the King James Bible. But you wouldn't know that Francis and Clare looked at the created world with this lens by reading their writings or the stories of their lives. They brought new life to the psalms that were loved and prayed by Jesus himself, such as this passage from Psalm 8: 'When I consider thy heavens, the work of thy fingers / the moon and the stars, which thou hast ordained; / What is man, that thou art mindful of him? / and the son of man, that thou visitest him?' (KJV) But they also showed how it is possible to look up at the skies and all around at the creatures of creation, praising and blessing God as a Creator who nevertheless does not value only humans. The human being shares the universe with other created beings in the early Franciscan worldview." 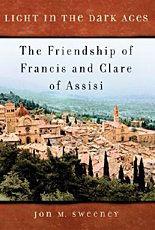