Thomas Berry, Dreamer of the Earth The Spiritual Ecology of the Father of Environmentalism

"When I admired a nurse for her strength and devotion in keeping long hours in the children's ward, she shrugged off my compliment as if it were entirely misplaced. 'It's not my strength, you know. I get it from the life in them,' she said, nodding at the rows of cots and cribs. 'They give me what I need to keep going.' Whether tending a garden or cooking in a soup kitchen, there is the sense of being sustained by something beyond one's own individual power, of being acted through. It is close to the religious concept of grace, but distinct from the traditional Western understanding of grace, as it does not require belief in God or a supernatural agency. One simply finds oneself empowered to act on behalf of other beings — or on behalf of the larger whole — and the empowerment itself seems to come through that or those for whose sake one acts. In the systems view, this phenomenon can be understood as synergy. It helps us recast the very notion of what power is.

"Since, as Berry makes clear, it is constituted of relations between subjects, rather than subjects and objects, our Earth community is, by its nature, self-organizing. The open systems that comprise it — be they cells or organisms, cedars or swamps — require no external or superior agency to regulate them, any more than your liver or an apple tree needs to be told how to function. In other words, order is implicit in life; mind is not separate from nature but integral to life processes. This, of course, contrasts with the hierarchical worldview our mainstream culture held for centuries, where mind is set above nature and where order is assumed to be something imposed from above on otherwise random, material stuff. We have tended to define power in the same way, seeing it as imposed from above. We have equated power with domination, with one thing exerting its will over another. It becomes a zero-sum or win-lose game, where to be powerful means to resist the influences and reduce the options of the other, and where strong defenses are necessary to maintain one's advantage.

"In falling into this way of thinking, we lost sight of the fact that this is not the way nature works. Living systems evolve in complexity, flexibility, and intelligence through interaction with each other. These interactions require openness and vulnerability in order to process the flow-through of energy and information. They bring into play new responses and new possibilities, increasing the capacity to effect change. This interdependent release of fresh potential, this synergy, is like grace because it brings an increase of power beyond one's own capacity or private resources." 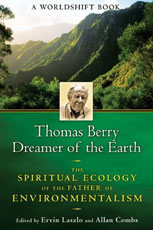