Portfolio Life The New Path to Work, Purpose, and Passion After 50

By David Corbett
David Corbett on why the old ideas about middle-age and retirement are up for grabs.

"One in eight Americans is now at least age sixty-five. Yet when the Social Security Act was passed in 1935, only one in twenty qualified for the new program. And the trend will continue. The number of Americans over sixty-five is expected to grow from 35 million in 2000 to 71.5 million in 2030, at which time one in five Americans will be over sixty-five. It has even been estimated that half of all people ever born in the United States who lived to age sixty-five are alive today. Biologists say that new technologies to replace parts or reverse aging in the human body could soon have people in industrialized countries living to age one hundred. At a recent scientific forum, Aubrey de Grey, a biomedical gerontologist at Cambridge University in England, predicted a 50 percent chance during the next twenty years of 'creating therapies to give middle-aged people an extra twenty-five years of life.'

"The trend has begun to alter public attitudes about aging and the stages of the life cycle. Let's say that during most of the last century, adults were 'young' during their twenties, entered middle age at thirty, and became 'old' at sixty. In the re-scaled life cycle, young adulthood continues to the mid-thirties. Early middle age occurs from thirty-five to fifty, and late or extended middle age is from fifty to sixty-five. The period from sixty-five to eighty — and here we get into the unnamed portions of the age map — is the gray zone of what has been called the young old stage. Because people in this group are still vital, this stage is closer in spirit and identity to late middle age than to true old age, which may not begin until age eighty-five.

"The revised view, then, creates about a twenty-year gap between our former and current concepts of old age. That is a fabulous gift of time in which to grow, enjoy life, and try to make the world, or at a minimum your world, a better place. Conversely, if you retire at age sixty and live to eighty-five, that is a very long time to just sit around.

"Abraham Lincoln noted that what counts is not the number of years in your life but 'the life that is in your years.' It might please him to know that his countrymen are not only living longer, they are healthier and more vital in their extra years. Studies show a marked decline over the last twenty years in chronic disabilities among people over age sixty-five. This improvement in health is due to advances in medical treatments and the increased attention Americans pay to diet and exercise. Older Americans are fitter than ever, and maintaining fitness over fifty is a growth industry. According to United States Masters Swimming, Inc., nine hundred of its forty thousand members are age seventy-five and up. At its meets, the group divides its older competitive swimmers into five age groups: seventy-five to seventy-nine, eighty to eighty-four, eighty-five to eighty-nine, ninety to ninety-four, and ninety-five to ninety-nine! One in eight of USA Triathlon's fifty thousand members is over age fifty. These are people who have caught on to the discovery, one backed by scientific research, of the new paradigm of aging. Gerontologists now believe that physical and mental health in later life are far more likely to be attributable to personal choices concerning diet, exercise, and self-care practices than to our genetic makeup.

"How does a longer life span affect retirement? It removes two core assumptions that created the concept. One was that older workers were not as strong or as quick as younger ones, which in physical labor affects productivity. Retirement was in part a way to replace older workers with younger ones. Today, however, only one in ten jobs in the United States is physically demanding. Regardless, health advances have made older workers more vigorous." 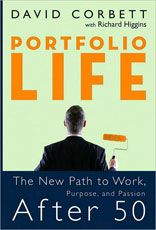