Why Can't We Talk? Christian Wisdom on Dialogue as a Habit of the Heart

By John Backman
John Backman on dialogue as a countercultural activity.

"We don't talk much about counterculture anymore. The word conjures up the 1960s with its echoes of revolution and antiwar demonstrations and flower power. Perhaps you never thought you'd be part of anything that could be labeled countercultural.

"In sociology, the word has a more precise definition: 'cultural patterns that strongly oppose those widely accepted in a society,' as one text puts it. By that definition, dialogue as a habit of the heart is countercultural on several levels. We have already seen one of them in abundance: Intractable conflict has become a cultural norm in many spheres of activity. We have come to expect it as standard operating procedure from elected officials and pundits. In so many church controversies, school board fights, and relationship squabbles, the possibility of dialogue as an option never crosses our minds. When it does, we worry that any attempt to reach across divides will somehow compromise our principles. Dialogue flies in the face of all this intractability: its very first instinct is to listen, to seek peace, to try to understand. It approaches from a position of openness rather than defensiveness. It does not seek to interrupt the other or even formulate a response while the other is speaking. Some people may see this not only as countercultural, but as dangerous; they have built their careers, even their whole orientation toward life, on conflict, so an orientation toward dialogue leaves them adrift.

"This sort of dynamic brings us to another way in which dialogue is countercultural: its resonance with the message of Jesus. His emphasis on mercy over rigid observance of the law — healing on the Sabbath, talking with women of a despised class or ethnicity, dining with the dreaded tax collectors and even calling one of them to be an apostle — ran him afoul of the authorities. When called to task by these same authorities, Jesus challenged them to reflect and reconsider their own assumptions. Dialogue presents a similar challenge to our long-held assumptions and rigid categories, no matter how gently or delicately we pursue it. Many people deride dialogue as an attempt to 'just all get along,' as 'fuzzy thinking' for the sake of avoiding conflict. It is quite the opposite. But rather than take up our adversarial culture's typical approach to challenge — shout, defend, cut off conversation — it seeks to engage the other in a deep experience of listening and conversing. It may not directly issue the challenge to change one's thinking, but that is often the effect.

"There is also a third way in which dialogue is countercultural. It has to do with values that our culture prizes above many others: efficiency, speed, results, return on investment.

"As we have seen, dialogue is a funny thing. Sometimes it succeeds beyond all expectation, the parties reach consensus, and everyone moves forward together. Sometimes it fails, we end up squabbling, and the answer arises from the ashes. Often it falls short of uncovering the truth, but satisfies the deepest longings of our souls, like the hunger for companionship or the need to be heard. At times it fails to achieve a policy solution, but moves the participants to see the legitimacy of the 'other side' and the humanity of its advocates. Sometimes dialogue sheds little light on a situation but somehow, mysteriously, brings us closer.

"Maybe, just maybe, we can say that dialogue never fails. Often it just succeeds in unexpected ways, and we fail to perceive it." 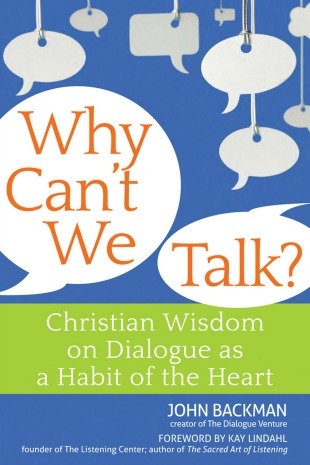