The Ceremonial Circle Practice, Ritual and Renewal for Personal and Community Healing

"A woman was raped on a Sunday morning while running on a walking path in a small town. The circle was called on the following Sunday morning by a local peace group. About seventy-five women and men gathered on the same path and walked in silence along it, following two women playing a heartbeat rhythm on their drums, all mindful of the atrocity perpetrated here and all the many others who are raped and abused.

"When the group arrived at the site they formed a circle and after the circle was cast various people read poems and statements and led a few songs. A small rock carved as a goddess was passed to each person in the circle and they were asked to speak their feelings, prayers, and commitments and to place these into the goddess-rock as they held it in turn. A woman and man then buried the goddess along the pathway, reclaiming the area as sacred ground and asking for protection for all those who pass there. Everyone left the circle committed to finding ways to end violence against women." 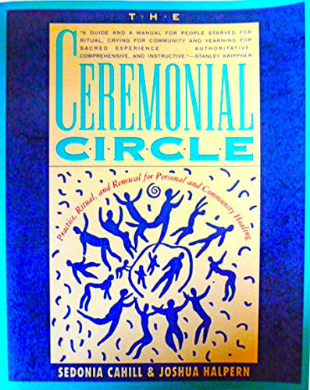