Who Owns the Future?

By Jaron Lanier
Jaron Lanier on how tracking services sell private data about you.

"Occasionally the rich embrace a new token and drive up its value. The fine art market is a great example. Expensive art is essentially a private form of currency traded among the very rich. The better an artist is at making art that can function this way, the more valuable the art will become. Andy Warhol is often associated with this trick, though Pablo Picasso and others were certainly playing the same game earlier. The art has to be stylistically distinct and available in suitable small runs. It becomes a private form of money, as instantly recognizable as a hundred-dollar bill.

"A related trend of our times is that troves of dossiers on the private lives and inner beings of ordinary people, collected over digital networks, are packaged into a new private form of elite money. The actual data in these troves need not be valid. In fact, it might be better that it is not valid, for actual knowledge brings liabilities.

"But the pretense that we have a bundle of other people's secrets is functioning like fine modern art. It is a new kind of security that the rich trade in, and the value is naturally driven up. It becomes a giant-scale levee inaccessible to ordinary people.

"Few people realize the degree to which they are being tracked and spied upon in order that this new form of currency can be created. There is an extensive literature and a sphere of activism already in place to address the situation, so I will present only the briefest exposition of the topic here, with plenty of footnotes to follow.

"Even an innocent visit to a legitimate major newspaper site like the New York Times invokes a competitive swarm of more than a dozen tracking services, each of which is attempting to become a dominant compiler of spy data about you. One plugin that attempts to block spying schemes, called Ghostery, is currently blocking more than a thousand such schemes, though no one knows the true number.

"There is no definitive map of network spying services. The allegiances and roles are multifarious and complex. No one really knows the score, though a common opinion is that Google has historically been at the top of the heap for collecting spy data about you on the open Internet, while Facebook has mastered a way to corral people under an exclusive microscope. That said, other companies you've probably never heard of, like Acxiom and eBureau, are also deeply determined to create dossiers on you.

"Because spying on you is, for the moment, the official primary business of the information economy, any attempt to avoid being spied on, such as the use of Ghostery, can seem like an assault on the very idea of the Internet." 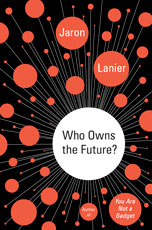