By Peggy Rubin
Peggy Rubin on experiencing life as a great, sacred play.

"Life can be experienced as a great play — sometimes a comedy, sometimes a tragedy, sometimes a satire, but always a play. A play is a story enacted by living actors before a living audience, not filmed, not recorded, but alive now.

"Plays have been around since the earliest days of humankind. I like to think they began soon after our ancestors discovered fire. Imagine the innumerable interactions that must have taken place around its comforting warmth — painting on cave walls or rocks or the bark of trees; making music, storytelling, or dancing; teaching the young ones — all elements that comprise the essence of human culture.

"Imagine also, in that ancient firelight, one of our ancestors wanting to tell us how she found honey by following bees to their hive, or how he and his cohorts chased and killed the wooly mammoth. As a group we are celebrating the honey or the great roasting haunch of meat. Telling the story excites us so much that suddenly one person leaps up and begins to enact the adventure, to tell it through the body as well as through the voice, as if it were happening in this moment. We watch, admire, question, and respond; perhaps we add music and sound. We participate in the enactment; we are changed by it and we never forget it.

"Today, as always, such telling is a way of honoring and understanding our lives as a community of human beings. Stories become a mirror in which we see the great patterns and deep truths that transcend the mere facts of our individual existence. Playing the play of life is a daring adventure. It takes courage, focus, excitement, and intention not to let our life stories just happen and instead stand up to enact them with verve and delight. . . .

"Let us return to the ancient firelight and our ancestors' celebration over the roasting meat. We can imagine the excitement as the first actor rises to enact the story of the hunt; we can almost hear the accompanying sounds and feel his listeners' enormous gratitude for the animal that gave its life to provide protein and also gave them this reason to celebrate — and, incidentally, to invent the theatre.

"Wise people who ponder such things suggest that our beliefs about the soul's existence might have originated in these moments. The hunters watching the animal's life ebb away would have felt not only exaltation over this gift to the tribe, attained after immense effort and cunning, but also sorrow over its loss. They must have experienced the puzzling sorrow that afflicts us all in the awesome, undeniable presence of death. Perhaps from that mix of joy and sorrow grew the hope that death might not mean the end for this buffalo or mastodon, that an everlasting part of it had gone to reunite with the great soul of buffalo or mastodon in the unseen world. And, our ancestors may have reasoned, if such could be true for the animal, then there was hope for their own everlasting life as well." 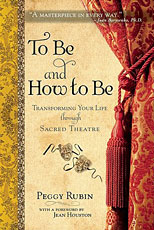