The Spirituality of Age A Seeker's Guide to Growing Older

By Robert L. Weber, Carol Orsborn
A story from Margaret Mead that illustrates the value of the elderly to a society.

"An increasing number of individuals in our generation are discovering the potential inherent in aging to provide a culmination to the spiritual path we have been walking most of our lives. This does not mean it's easy: waking up from illusion to embrace both the shadow and light of aging and mortality is hard work. As Rick Moody put it so eloquently in his article 'Conscious Aging: A New Level of Growth in Later Life': 'Conscious Aging – the holistic line of development – is not an easy path nor is Conscious Aging likely to appeal to a majority of those entering old age.'

"So why embark on this path in the first place? What is the value of aging, to ourselves and to society? Let's begin with a story about the value of aging to society. In the 1950s anthropologist Margaret Mead delivered a memorable lecture that has relevance to our consideration. Her discussion centered on the role of postmenopausal red-tailed deer in their herd. From the outside these old does appeared to have no value. Their male counterparts, charged with protection of the herd, had all been killed off over the years. It would be natural to think of the elderly who remained as burdens to the herd. But this was not the case.

"Mead goes on, 'In time of drought, these old does could remember where once, long ago, under similar circumstances water sources had been found. When spring came late, they recalled sunny slopes where the snows melted early. They knew how to find shelter, places where blizzards could be waited out. Under such circumstances, they took over the leadership of the herd.'

"Margaret's story goes straight to the heart of the question at hand, standing in stark contrast to contemporary Western society: a culture that still tends to think of aging as a problem, marginalizing, ignoring, and even reviling the elderly. But just as the old does knew where to find sunlight, we who are growing old have knowledge and wisdom to share with others, inner reserves of resources upon which to call that are often dismissed too readily by those who would benefit the most.

"Not all of what we have to contribute is internal, either. Many of us are crossing the transom beyond midlife with the energy and desire to give back. We feel the pull of legacy, the promise of purpose, and what Erik Erikson called the passion for generativity. Many of us have the time and resources to volunteer, to mentor, and to contribute. Spiritual maturity carries with it the organic urge to make a difference: to do our utmost for as long as possible.

"But here, too, is the paradox of age. For even as we respond to the yearning to utilize our skills and abilities to the full for the greater good, we feel a tug at our hearts to develop qualities and potentials in ourselves too long neglected. Sometimes by choice, sometimes by circumstances, we come to realize how much of our sense of mastery over our fates had always been limited. Embracing aging with humility, acceptance, and surrender, we enter, at last, the realm of the mystic, finding ourselves walking a path that has inherent value of its own." 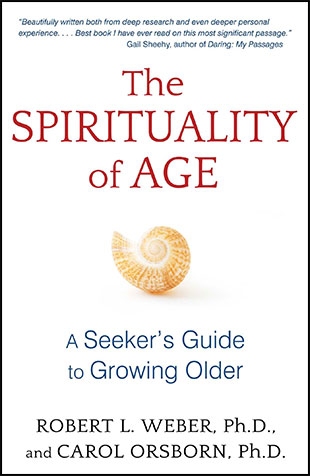