By Joan Chittister
An important lesson about acceptance from Danny the puppy.

"Danny lived life on his own terms, and I learned to adjust.

"Most startling of all, this wiggly, soft, and dewy-eyed puppy started his clawing, chewing search for independence and self-will early. It was the first night we had him, in fact.

"I got the dog into the convent by promising the older sisters that Danny would stay in the empty garage that flanked our house on one of the main streets in the town. And I meant it. Students stayed after school that first day to build a doghouse for him in a dark corner of the garage, then lined it with covers, and secured a food and water bowl near its door.

"We were hardly finished with the project when it was abandoned. 'No dog can stay in that garage,' the sisters told me. 'No dog.' Why? Because, they insisted, there were rats under the garage floor. Whether or not anyone had ever seen one, I'm not sure to this day. But since I didn't really want Danny there to begin with, I was quick to abandon the garage and bring the puppy through the front door squealing and squirming as we went. Now all I had to do was to rebuild the dog bed inside the house, at the foot of the basement stairs. Which, fortunately, were directly under my bedroom. From there I would be able to keep a watch on things. You know, control his puppyness, keep control, make sure that a dog did not disturb the good order of the convent. I wanted the relationship, yes, but on my terms, not his.

"For the next three nights, I forced myself out of bed when the howling began. I groped for the roll of newspapers I had learned to keep on the floor beside me and stumbled down the stairs. The trick was to open the basement door and slap the newspaper roll against the wall – hard – till the new puppy was alarmed enough to stop the howling.

"When he quieted down, I tiptoed back up the stairs, fell into bed exhausted, and waited for the howling to start again. Which it did. For one, two, and three straight days.

"Finally, sleep-deprived and carrying a white flag, at three o'clock in the morning of the fourth night of this new relationship, I surrendered. I left the newspaper roll on the floor and went and got Danny instead. Patiently, but firmly, I put him on the throw rug beside my bed and went back to sleep. Until, with no small sense of alarm, I felt him squirm next to me. Clearly, this would take a little repetition for him to get the idea that he slept on the floor and I slept in the bed.

"The second time he crawled in beside me, I took him off the bed and put him down on the floor again. And the third time, too. The night was going by quickly now. When it happened the fourth time, I figured out what to do. I attached the leash to his dog collar and put the other end of it under one of the legs of the dresser across the room. He could sleep on the rug at the foot of my bed for tonight. Tomorrow, he would go back to the basement where, more familiar with it now, I was sure he would finally sleep through the night. But for the rest of this night, at least, the problem had finally been solved.

"Triumphant, I heaved a sigh of relief and fell deeply asleep.

"It was when I felt something wet against my fingers that I knew I had a problem. I reached my hand above my head carefully and quietly and flipped on the bedroom light. There lay Danny the puppy tucked in tightly beside me, still leashed to the dresser he had managed to jockey all the way across the room. It was tilted now against the bottom of my bed. I unsnapped the leash, turned out the light for one last time, and let the dog go on sleeping where he was so I could sleep, too.

"But I got it. There are some things in life that are simply not worth spending energy on. Danny knew what his priorities were; I had misunderstood mine. Danny was struggling to relate, to be accepted, to find a place in life that was worth reaching for, where he was safe and wanted and at home. I, on the other hand, was struggling to keep life within the boundaries I had independently defined for it years before Danny arrived to reshape it.

"Until then, acceptance had never been high on my list of spiritual virtues. It was Danny, who, that very first night, brought me face-to-face with the power of it." 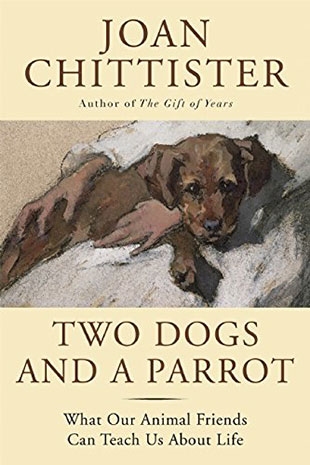