The Robots Are Coming! The Future of Jobs in the Age of Automation

"At first glance, the Oxford researchers' algorithm seemed somewhat ruthless. Is there really a greater than 90 percent chance that the jobs of waiters, receptionists, truck drivers, tour guides, and real estate agents won't exist in the near future? I asked them. Don't waiters do a job that, in addition to providing a human touch, requires a high degree of improvisation and creativity when it comes to responding to unexpected situations? How would a humanoid waiter deal with a customer who wants to exchange one dish for another? And when it comes to truck drivers, will an autonomous truck be able to react quickly enough to unexpected events like a dog running across a road?

"[The researchers] responded with resigned smiles. It might be hard to believe, but this won't be the first time in history that common jobs disappear only to be replaced by others, they said. Until recently, in many countries around the globe, agriculture employed more people than any other industry. Now it's far from the main source of work. For example, the number of people working in agriculture in the United States fell from 60 percent of the population in 1850 to less than 2 percent in the early twenty-first century. There were only 700,000 farmers in the United States in 2010, down from 12 million a century earlier in 1910, despite the fact that the overall population had tripled during that period. But the world didn't come to an end. On the contrary, average Americans saw their standard of living rise. If agriculture could be revolutionized by tractors and computers, thus forcing millions of people to seek new occupations, they argued, why not expect something similar from the current revolution in robotics and artificial intelligence?

"It's a fair question. Plus, recent history shows us that skepticism is a bad method of predicting the future. Many ideas that seemed preposterous just a decade ago are now part of our daily lives, which we now accept as completely normal. After all, if someone had told me ten years ago that I would have a virtual assistant named Siri on my cell phone and that I could ask her to tell me the capital of Afghanistan and receive the correct answer, I would have considered the whole idea to be insane. The same thing would have happened if someone had told me an application called Waze could tell me, loudly and in the language of my choice, the shortest and quickest route to my destination, or that I could buy plane tickets online, or that supermarket cashiers would be replaced by self-checkout stations. But all that — in fact, much more — is already happening.

"Technological advances happen so quickly that they numb our capacity for amazement. New innovations might stun us for a few minutes, but soon enough we incorporate them into our lives as if they've always been with us. Not many people would remember that the iPhone as we know it today didn't exist before 2007, or that Waze — the app that calculates traffic and driving time to a destination — went into worldwide use only after the company was bought by Google in 2013. But today many of us wonder how we had ever lived without them." 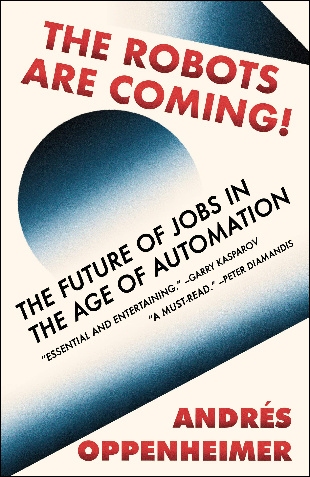