The Forgotten Americans An Economic Agenda for a Divided Nation

By Isabell Sawhill
A comparison between the novel Lord of the Flies and the early decades of the 21st century.

"Anyone concerned about the state of America in the early decades of the twenty-first century should read William Golding's well-known novel Lord of the Flies. A group of English schoolboys is marooned on an island. They need to find food, build huts, keep a signal fire burning, and protect the youngest and most vulnerable members of the group ('the littluns').

"America, much like the boys in Lord of the Flies, is in trouble. In Lord of the Flies, the boys are eventually saved by a British naval officer — a kind of deus ex machina end to the novel. But who or what is going to save America? The country is experiencing deep divisions and, in the minds of many, a lack of sober leadership.

"As I argued in earlier chapters, our society is coming apart. Growing inequality and long-term joblessness are leaving too many people behind, with political consequences that were all too evident in the 2016 election. If we continue on our current path, the center may not hold. The appeal of a populism that flouts long-established Democratic norms could do severe damage to our political system. I am under no illusion that the ideas contained in this book will assuage a feeling among too many voters that their elected officials have failed to address their concerns. But something like what I have proposed might send the message that they have been heard. It is time for both parties to face the reality that the biggest problems in America are deep economic and political divisions. I believe we should favor a system in which work is expected and rewarded. But it should also be a system that recognizes the flaws in a pure market system — a system that will only flourish if the flaws are addressed.

"Like the boys in Lord of the Flies, we need leaders, rules, and norms that enable individuals and enterprises of all kinds to flourish. As long as a majority of the population remains hostile to government, it will be difficult to move forward with a more enlightened set of policies. Breaking the impasse would be easier if we could come together around some moral principles, not just a laundry list of programs — principles that recognize both rights and responsibilities, what individuals must do and what we can only do collectively. In this book, I have argued that three values might command broad support. Those values are the importance of family, education, and work.

"Are we, like the boys in Lord of the Flies, waiting to be saved by some outside force, or are we capable of electing principled leaders from both parties who care more about being statesmen than about being re-elected? Can we repair our government institutions to make voting easier, gerrymandering less prevalent, the electoral system more consistent with the principle of 'one man, one vote,' and money in politics less influential? Only time will tell. E. J. Dionne, Thomas Mann, and Norman Ornstein suggest some possible political reforms in their book, One Nation after Trump. In the meantime, we should be clear about the nature and scope of our economic problems, how they are affecting most Americans, and what we might do. Political reform is very difficult; cultural divisions don't lend themselves to government solutions, but the opinion divide on economic issues is less wide and a solution is more within reach." 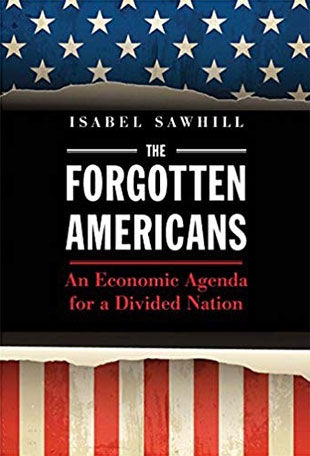