Science and Spiritual Practices Transformative Experiences and Their Effects on our Bodies, Brains, and Health

By Rupert Sheldrake
A celebration of sharing spiritual practices

"There are many spiritual practices, and all religions include a wide range of them. These are not mutually exclusive; they are mutually reinforcing. . . .

"Not all practices work equally well for everyone, and all of us have to make our own choices among them. For people who follow a religion, many of these practices are already part of their lives. But often their effectiveness is dulled through familiarity. By looking at these practices afresh, their power can be renewed.

"Each religious path involves its own selection of spiritual practices, emphasizing some more than others. As a result, some are unfamiliar to people who are already following a religious path. For example, many Protestant Christians are not used to going on pilgrimages. These sacred journeys were familiar to their pre-Reformation ancestors and are still familiar in the Eastern Orthodox and Catholic churches. Likewise, contemplative prayer and other Christian forms of meditation are well known in communities of monks and nuns, but less well known among lay people, who often benefit from discovering them.

"One of the areas in which religious people can learn from the nonreligious is in connecting with the more-than-human world in new ways opened up by science. Even the most atheistic scientists form a relationship with the natural world through their investigation of it, however specialized their field of study. Many religious people lack this sense of connection with the details of nature, and some seem impatient to soar beyond them.

"This is an area with a huge potential for spiritual exploration. The natural sciences have unveiled a universe far larger, older, and stranger than anything previously imagined. They have revealed details about biological life that no one knew before, including the existence of realms of microorganisms around us, and also within us: the vast community of microbes that lives in our guts. The sciences have penetrated into realms of the very large and the very small which our ancestors knew nothing about. The trouble is that the sciences give us vast amounts of data, but it is devoid of personal or spiritual meaning.

"By contrast, traditional spiritual connections with the more-than-human world found meaning and significance everywhere, but knew nothing of these recent discoveries of the sciences. To combine these two approaches is a uniquely modern challenge.

"We are all on journeys. Spiritual practices can enrich our lives and give us a stronger sense of connection with each other, as well as with life and consciousness beyond the human level. These practices can help us accept some of the many gifts that we are offered and give thanks for them. The more we appreciate what we have been given, the greater our motivation to give." 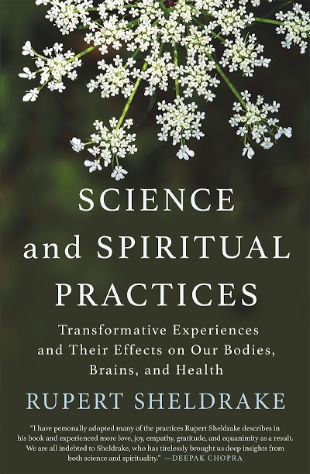