Speaking Peace in a Climate of Conflict

By Marilyn McEntyre
A call to reinvent what peace looks like in our time.

"The prophet Jeremiah warns against spurious and deceitful declarations of 'peace.' As the New Living Translation puts it, 'They offer superficial treatments for my people's mortal wound. They give assurances of peace when there is no peace' (Jer. 6:14). His words have direct application to current political rhetoric in which 'peace,' 'peacemaking,' 'peacekeeping,' 'peaceful solutions,' 'peace talks,' and 'peaceful coexistence' cover over a multitude of tensions, conflicts of interest, power plays, incipient threats and direct contradictions, as in the applicaton of the term 'peacekeepers' or 'peacekeeping forces' to armed military employed to keep civilian populations under surveillance and control.

"One simple, gentle, and persistent act of resistance to the Orwellian Newspeak that declares 'War is peace' is the bit of bumper sticker wisdom that urges us to 'Wage peace.' Quakers, Mennonites, and other groups committed to peacemaking and peacekeeping have devoted several centuries to developing a vigorous, courageous, politically engaged, and spiritually deep understanding of what 'peace' might mean and what it takes to 'wage' it.

"In a nation where well over half our tax dollars are spent on military enterprises, including multibillion-dollar contracts to private weapons manufacturers; where the Pentagon plans to spend a trillion dollars over the next three decades on a new generation of nuclear-armed bombers, submarines, and land- and air-based missiles; and where we already have more than four thousand nuclear warheads in active stockpiles, those who raise a cry for 'peace' are up against not only a war of words but a massive edifice that Eisenhower presciently termed the 'military-industrial complex.' In his 1961 farewell speech as outgoing president, Eisenhower, the five-star general who had led the US troops on D-day, warned, 'We must guard against the acquisition of unwarranted influence, whether sought or unsought, by the military-industrial complex. The potential for the disastrous rise of misplaced power exists, and will persist.'

"Since then we have normalized the 'military-industrial complex' as it has become less and less distinguishable from the variegated enterprises of multinational corporations whose concern is less for the common good than for shareholders' wealth. The need to reimagine, and perhaps reinvent, what peace might look like in our time is urgent, and the task requires both a long look into the way war works now and a concerted, committed, thoughtful, prayerful plan for new projects and policies that might help equalize distribution of essential resources; make shelter, food, and health care more accessible for the poor; insure proper care of the ecosystems we all depend on; put reasonable limits on greed; and make room for all points of view to be articulated safely in the public square.

"'Peace,' it seems to me, would have to include less imprisonment and more mental health care; support for children and the families, teachers, and local communities that seek to nurture and protect them; serious, patient, informed listening across partisan lines to deepen mutual understanding of the concerns that lie behind political posturing; and full, fair, equal access to voting booths and to citizenship for all whose rights the Constitution established. 'Peace' has to include safety and diversity and protection without abuse of power. It has to include law enforcement without legalized brutality.

"To 'speak peace' in the midst of war talk, we need plain words that remind us of original meanings and historical contexts and that will stay with hearers and disturb them into reflection — not simply a list of benevolent abstractions (equality, justice, access, fairness, compassion) but concrete nouns that help us imagine what peace would be like as a shared experience: children eating responsibly grown food, some of it from school gardens; safe and civil conversations in public places where people in circles face one another; well-maintained public parks, trails, forests, and lakes where people can visit and be reconnected with the natural creatures and systems we depend on." 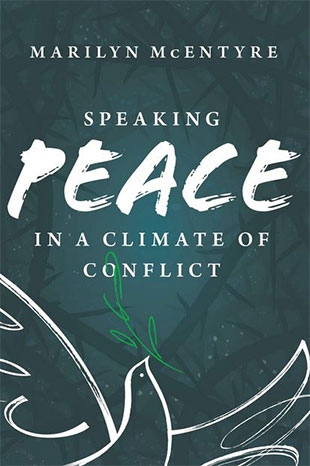