A Man Without a Country

Sign us up. The playful, smart, sappy (he uses the term about himself), and prophetic man of letters, Kurt Vonnegut displays his wry humor, cultural criticism, political satire, and savage commentaries on the insanity of our times in this ribald collection of pieces from the Chicago paper called In These Times.

When we say sign us up, we are referring to the following:

"I don't know about you, but I practice disorganized religion. I belong to an unholy disorder, we call ourselves 'Our Lady of Perpetual Astonishment."

Vonnegut is a disciple of astonishment in these savvy essays. He is astonished that "our unelected leaders" have made Americans as feared and hated around the world as Nazis once were. And he adds: "The highest treason in the USA is to say Americans are not loved, no matter where they are, no matter what they are doing."

Vonnegut is astonished that we are trashing the planet with a century of "transportation whoopee." Rev up your motors, boys — you have nothing to fear except the wreckage of the only "sweet life-supporting planet . . . in the whole Milky Way." According to the author, the planet's immune system is trying to get rid of us.

But let's not get too dark and gloomy here. Vonnegut is an Honorary President of the American Humanist Association. He sees humor as "a way of holding off how awful life can be, to protect yourself . . . Humor can be a relief, like an aspirin tablet." Here's one aspirin tablet to help you change the way you act tomorrow.

"How beautiful it is to get up and go out and do something. We are on earth to fart around. Don't let anyone tell you different." Vonnegut ought to know, he has been farting around a long time and bringing pleasure to us and many others.

Another aspirin tablet is Jesus' Beatitudes from the Sermon on the Mount. Many have found them to be very funny — meaning too exalted to practice in daily life, so they can be completely ignored. Vonnegut wisely points out that many Christians got upset when the Ten Commandments were not allowed to be posted in some public buildings. But they've never demanded that the Beatitudes be posted anywhere! Vonnegut the humanist writes: "If Christ hadn't delivered the Sermon on the Mount, with its message of mercy and pity, I wouldn't want to be a human being. I'd just as soon be a rattlesnake."

A Man Without a Country contains plenty of other personal revelations about Vonnegut's past, his love of music, and his respect for Eugene Debs, Mark Twain, and Ignaz Semmelweis. Take some time to savor the sketches and illustrations by the Kentucky artist Joe Petro. We were so happy to see this advice pop up on one of the pages of this frolicsome work: "What made being alive almost worthwhile for me, besides music, was all the saints I met, who could be anywhere. By saints I meant people who behave decently in a strikingly indecent society."

Lately we have become devoted followers of "Our Lady of Astonishment." One of our practices is to acknowledge and honor all the saints who have helped make our lives richer by being so decent and kind in these barbaric times! 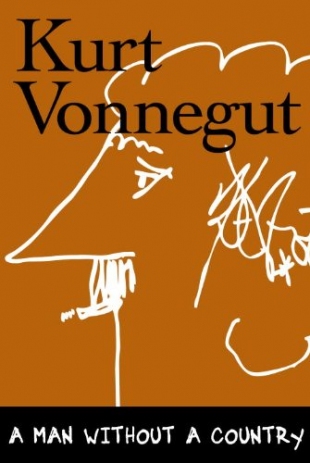