Inner Revolution Life, Liberty, and the Pursuit of Real Happiness

By Robert Thurman
Wisdom about Buddhist traditions of nonviolence, optimism, and unconditional love.

"To finish building the free society dreamed of by Washington, Franklin, and Jefferson, we must draw upon the resources of the enlightened imagination, which can be systematically developed by the spiritual sciences of India and Tibet," writes Robert Thurman, college professor, the first Western Tibetan Buddhist monk, and co-founder and president of Tibet House in New York City. He traces the slow evolution of the inner revolution initiated by the Buddha. The tradition of nonviolence, optimism, concern for the individual, and unconditional love has been nurtured in Tibetan monasteries for centuries.

Thurman sees freedom as the highest value, "the doorway to our highest destiny and our supreme fulfillment." He believes we can replace the politics of cynicism with the politics of enlightenment. The five principles at the heart of this alternative to modernity are transcendental individualism, nonviolence, educational evolutionism, social altruism, and universal democratism.

Thurman spells out some of the benefits of adapting to the bodhisattva spirit incarnated by Tibetan monk-scholars and lama figures. He envisions a society of enlightened beings who take responsibility for ending the suffering of other beings, who are supreme artists of life, and who are agents of compassion. Thurman ends this ambitious work with some contemporary ideas for an actual political platform based on enlightenment principles. 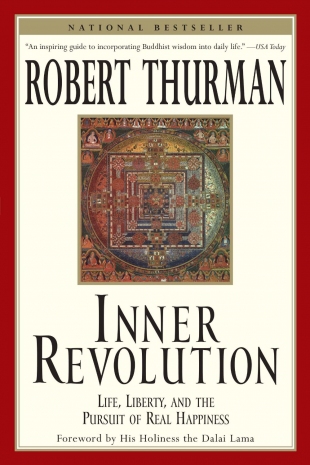