The Passion of Mary Magdalen A Novel (The Maeve Chronicles)

By Elizabeth Cunningham
A raucous, inspired treatment of Mary Magdalen as an embodiment of the Divine Feminine.

Elizabeth Cunningham beckons us with the words, "Come. . . Taste the mystery." In her raucous, inspired, and thought-provoking novel, she challenges us to merge the contraries of paganism and Judeo-Christianity, spirituality and sexuality, and male and female divinity. Cuningham is a prolific writer and an Interfaith minister who wants to take us on a spiritual adventure with Mary Magdalene, the controversial Biblical character who for centuries has been touted as the repentant prostitute. On these pages, she is much, much more, stretching into the embodiment of the Divine Feminine. She even shape-shifts into the dove who is present at some of the most important moments in the life of Jesus of Nazareth.

Mauve Rhuad of the free Celts is raised as a heroine, the daughter of eight warrior witches. Exiled from her native land, she is captured by slavers and purchased by a Roman madam. Mauve speaks five languages and earns a reputation as a special prostitute. During this period of slavery, she roils against the Romans but finds inner satisfactions with Joseph of Arimathea, a patron who holds an inherited seat on the Jewish Sanhedrin. Mauve encounters Isis and is transformed into an underground priestess.

When the time is right, Mauve wins her freedom and travels to Palestine in hopes of reconnecting with Esus, called Jesus, whose life she once saved at quite a high cost. Among the other colorful characters in this novel are Ma, the mother of Jesus whose face is similar to "a lone tree in a field hollowed out and half-destroyed by lightning"; Peter, who is described as having rocks for brains; John the Baptist whose nickname is the Dipper for his practice of plunging followers into water; Mary of Bethany who yearns to be a rabbinical scholar; and Judas, the disciple who doesn't want women on a mission with the Son of Man.

In Cunningham's story, Mary is Jesus' lover and soulmate and a witness to his healings, exorcisms, and miracles. She is a wild and robust red head who sets up Temple Magdalen on the Sea of Galilee, where the mysteries of sacred prostitution are explored in the flesh and in the spirit. It is also a place where the community serves those in need and embraces all strangers and rejects.

The Passion of Mary Magdalen is the central novel in a planned trilogy by Cunningham called The Maeve Chronicles. The forthcoming prequel recounts how young Mary and Esus met, and in the sequel, Mauve will raise a daughter and struggle to create her own place in the early church and beyond. If the other books are like this first one, well-written and full of colorful details that activate your imagination, this series will be a good read. 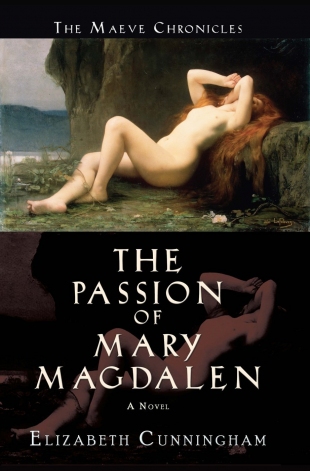