"Sometimes when Maryam Yazdan looked at her new little granddaughter she had an eerie, lightheaded feeling, as if she had stepped into some sort of alternate universe. Everything about the child was impossibly perfect. Her skin was flawless ivory, and her hair was almost too soft to register on Maryam's fingertips. Her eyes were the shape of watermelon seeds, very black and cut very precisely into her small, solemn face. She weighed so little that Maryam often lifted her too high by mistake when she picked her up. And her hands! Tiny hands, with curling fingers. The wrinkles on her knuckles were halvah-colored (so amusing, that a baby had wrinkles!), and her nails were no bigger than dots."

If you've read any of Anne Tyler's previous novels, you'll recognize her wonderful attention to detail conveying wonder and awe in this passage from her seventeenth novel. Set in Baltimore, Maryland, it covers a time frame from 1997 to 2003. In her last work of fiction, The Amateur Marriage, she examined American culture through a couple's experiences over a 60-year period. Here the topic is very timely: being an American, relating to other cultures, assimilation, and the challenges of feeling like an outsider.

Two families meet at the airport where they are picking up adopted Korean babies. The Donaldsons are typical Americans, and the Yazdans are citizens who came to the U.S. from Iran. The hubbub at the airport has been orchestrated by Bitsy Donaldson, an energetic and pushy woman. Later, she calls the Yazdans and invites them to a leaf-raking supper. They begin a friendship which centers around an annual party celebrating the arrival of their Korean daughters. The couples show the video and sing a robust version of "She'll Be Coming Round the Mountain" as a theme song. But Sami Yazdan grows restless with Bitsy's constant barrage of advice on everything from cloth diapers to organic food to wearing black-and-white clothing. His wife Zibia is more amenable to her advice, eager to be a good mother and do the right thing.

Sami's mother Maryam turns out to be the pivotal character in the novel. She arrived in America as a 19-year old bride from Iran and has been a widow for 19 years. Now in her sixties, Maryam is an independent woman who enjoys her privacy. When the Donaldsons enter her life, they represent an energy force that feels intrusive. Equally surprising is when Bitsy's widowed father becomes interested in her.

Digging to America provides a delightful romp through the annual Arrival Day celebrations and the complications and affections that bloom out of the cross-cultural relationships between the Donaldsons and the Yazdans. 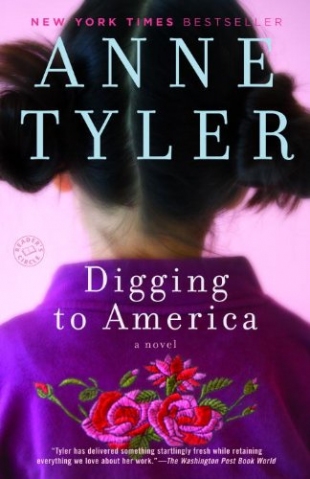