The Buddha and the Terrorist

We live in a world where terrorists cut off hostages' heads and fighters in the so-called war on terrorism murder civilians in their beds. The cycle of violence is fueled by virulence in the media and harsh rhetoric in political circles. Satish Kumar made an 8,000-mile peace walk around the world and later founded the London School for Nonviolence. Now he has come up with a very timely contribution to the cause of peace and reconciliation — a compelling retelling of an ancient parable about the Buddha and the terrorist. In his foreword, Thomas Moore sets it alongside the Gospel of Jesus, the Tao of Lao Tzu, and the way of love in Sufism as a renunciation of violence and a plea for "restoring the holiness of life's power."

In a northern town of India, a man known as Angulimala has been randomly murdering people and cutting off their fingers. No one can stop him since he is so strong and determined. The Buddha hears about this killer and is unafraid: "Life lived in fear is no life. . . . I must reach out to those who are possessed with anger and ignorance." Encountering Angulimala, he tells him that he is capable of being a friend, of compassion, and of change. The killer is taken aback for the Buddha enables him to see himself afresh, to deal with the pain of his past, and to come to terms with the separation he feels from others.

Thanks to his dialogue with the Buddha, Angulimala becomes a monk and takes the name Ahimsaka ("The Nonviolent One"). But the King and those who lost their loved ones to the terrorist want revenge. Here is where we recognize the forces that are at play in our society. Approaching the fifth anniversary of 9/11, many Americans still cling to the idea of an eye for an eye and the illusion that we can create a society where all are secure from the deeds of evil-doers. This poignant parable emphasizes the primacy of loving the enemy and practicing nonviolence. What we see at work in this brief story is the restorative power of forgiveness. 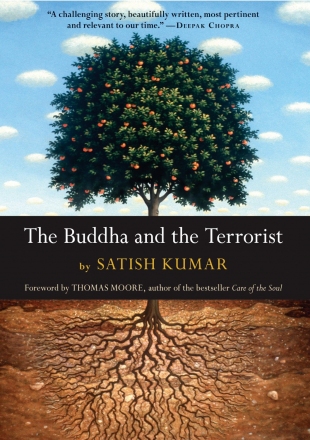