Desmond Tutu, the Anglican Archbishop and Nobel Peace Prize Laureate, has spent his life seeking justice for his people and waging a battle for peace in a war-torn world. He came up with the phrase "the rainbow nation" as a description for the new democratic South Africa. In fact, throughout his long and illustrious career as a teacher, a pastor, and a human rights activist, Tutu has been a "rabble-rouser for peace." That is the term his authorized biographer John Allen uses to sum up his life. It is apt and poignant. The author is a South African journalist who joined Tutu's staff when he became archbishop in 1986. He went on to serve as director of communications for the country's Truth and Reconciliation Commission and for Trinity Church Wall Street in New York.

Tutu was born in Klerksdorp, South Africa, and overcame a sickly childhood to become a teacher, as his father had been. Later in his life, he would quote one of his father's favorite aphorism's: "Don't raise your voice. Improve your argument." In seminary, Tutu showed gifts of leadership and went on to study theology in London. He left his position as Bishop of Lesotho, South Africa, to become the first black General Secretary of the South African Council of Churches, a position he held until 1985. Three gifts served him well as he moved to a larger stage: his caring nature, his ebullient personality, and his photographic memory. The biggest challenge in this ministry was working for justice and racial reconciliation in South Africa. For those efforts, he was awarded the Nobel Peace Prize in 1984.

Allen reveals the boldness with which Tutu defied apartheid, his courage in the face of arrests and death threats, and his attempts to have racist leaders put their Christian beliefs in sync with the teachings of the Gospel. Further insights into this church leader's contributions come from interviews with Nelson Mandela, F.W. de Klerk, former U. S. Vice-president Al Gore, and rock star Bono of U2.

Allen presents a robust overview of Tutu's role and importance as Chairman of the Truth and Reconciliation Commission, convened to deal with the aftermath of apartheid. Tutu emphasized the crucial moral role of forgiveness for all sides. Today Tutu continues to speak out against war and the international crisis of AIDS/HIV, which is pandemic in Africa. Allen singles out Tutu's rigorous and consistent appeal to reconciliation as a means of healing community as his single most enduring legacy. 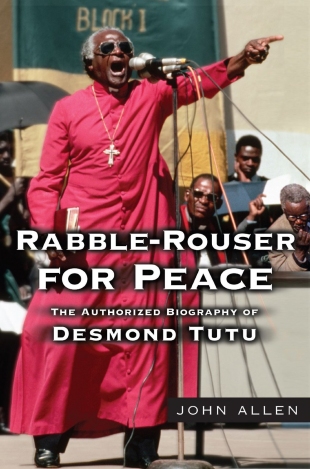