By His Holiness The Dalai Lama
A new edition of the first book of teachings by the Dalai Lama in the English-speaking world and one that is foundational to His Holiness's message.

This book was first published by Snow Lion, now an imprint of Shambhala and is now being reissued. A classic study for Tibetan Buddhisms and all those interested in this tradition, it draws on His Holiness's lecture tours in the United States in 1979 and 1981 and in Canada in 1980. The Dalai Lama spoke at universities, colleges, ecumenical gatherings, Buddhist centers, and public meetings.

The 20 chapters are arranged in a developmental sequence so readers can move through them from rudimentary material to complex topics. The teachings, according to translator and editor Jeffrey Hopkins, provide a map of Tibetan spiritual culture.

In a chapter on "Religious Values and Human Society," the Dalai Lama emphasizes that the world's religions must accentuate things they have in common, such as improving human beings, a sense of brotherhood and sisterhood, and love. Actions are more important than beliefs:

There are chapters on the importance of compassion, karma, the four noble truths, the luminous nature of the mind, meditation, selflessness and the mind of clear light. The Dalai Lama gives a solid overview of the basic elements of Tibetan Buddhism and shows why he has been heralded around the globe. 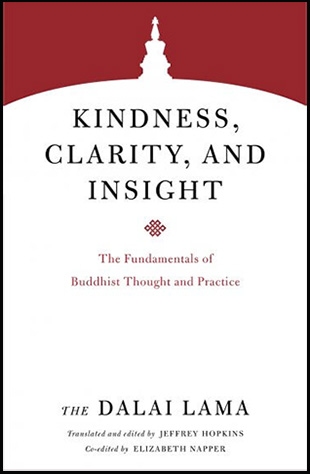