Opening the Doors of Wonder Reflections on Religious Rites of Passage

By Arthur J. Magida
A fascinating overview of religious rites of passage among Christians, Jews, Hindus, Buddhists, and Muslims.

This richly developed volume looks at rites of passage rituals as celebrated by the world's religions. "There is no surety that coming-of-age ceremonies will bind anyone to God or religion with permanence or ferocity," writes Arthur Magida. "These are neither implacable guarantors of faith nor surefire remedies for lost, wandering, or inquiring souls. Invariably, they are stabs in the dark — seasoned stabs, if you will, because various permutations of these rituals have been performed again and again, in many places and over many centuries. Not, in the long run, do these ceremonies necessarily impart profound and illuminating insights. They can, and ideally they should."

The author is writer-in-residence at the University of Baltimore. He has been a columnist/contributing editor for Beliefnet.com, a contributing correspondent for Religion & Ethics Newsweekly on PBS, senior editor of the Baltimore Jewish Times and editorial director of Jewish Lights Publishing. From this rich background, he lets light in from all directions on coming-of-age ceremonies and their meanings: Jewish bar and bat mitzvahs. Christian baptisms and confirmations, Muslim shahadas, Hindu sacred thread ceremonies, and Zen jukai ceremonies.

Magida presents profiles of a fascinating group of religious and well-known figures and then has them share through interviews their memories of their coming-of-age ceremonies. Exploring the Christian faith is TV journalist Robert Abernathy, African novelist Chinua Achebe, interfaith explorer Huston Smith, comedian Julia Sweeney, and founder of the Arab-American Institute Jim Zogby. Among those probing Jewish rites of passage are the best-selling writer and Rabbi Harold Kushner, Nobel Peace Laureate Eli Wiesel, psychedelic pioneer Ram Dass, Rabbi Jeffrey Salkin, and writer Letty Pogrebin and her daughter Abigail. Deepak and Gotham Chopra, the internationally known holistic guru and his son, talk about the thread of life in Hinduism. Examining a Buddhist ritual are Zen Roshi John Daido Loori and Robert Thurman, the foremost expert on Tibetan Buddhism in the West. Discussing rituals in Islam are Coleman Barks, the renowned translator of Rumi; Dr. Yusaf Islam, the former rock star Cat Stevens; and Michael Wolfe, a writer and Jewish convert to Islam.

For some of these believers the religious rite of passage had profound meaning and served as an important transition point in their spiritual journey. For others, it was an immense disappointment and did not work its magic on their souls.

For years, men's movement leader Robert Bly has lamented the fact that American youth do not have any significant rites of passage beyond getting a driver's license. Certainly nothing compares to the ceremonies that aboriginal young men perform in primal cultures. Magida points to the experiments by Reform Jews and Catholics whereby youth are required to choose a social service project that speaks to them — such as aiding migrant workers, volunteering at food banks, or helping Habitat for Humanity build homes for the needy. The author also takes a brief look at new evolving ceremonies, such as the Quinceanera among Hispanics and a Quaker foot-washing ritual. Wonder is nourished by religious ceremonies and the more of them that are developed, the better for everyone. 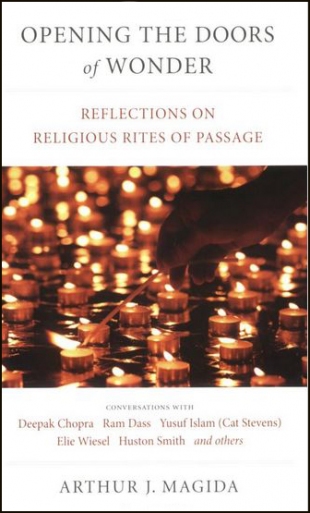