By Arthur Kurzweil
A substantive and enlightening overview of Kabbalah, past and present.

Arthur Kurzweil, a traditional practitioner of Judaism and the publisher of Parabola magazine, presents a substantive and enlightening overview of Kabbalah, past and present. He uses the term not in reference to a general philosophy of life but rather as a spiritual practice inextricably integrated into Jewish law, ritual, prayer, and study. This paperback is divided into sections on:

• So What's the Big Secret? Unmasking Kabbalah — a hard look at its terminology and a brief history.

• Cutting to the Core of Kabbalah — how practitioners participate in the repairing of the world as well as the nature and journey of the human soul.

• Livin' La Vida Kabbalah — the major activities, celebrations, and rituals that make up the life of a Kabbalist.

• Fine-tuning the Essential Skills of the Kabbalist — study of the holy books of Kabbalah, recitation of daily prayers, and a view of God known to believers as the Infinite One.

• The Part of Tens — interesting lists of people, places, and myths related to Kabbalah.

• Appendixes — a list of books and authors related to Kabbalah, a breakdown of the important characters in the Torah, and a glossary of all things Kabbalah.

Kurzweil has done a marvelous job orchestrating the many marvels of Kabbalah with cogent explanations of key concepts (tikkun, receiving, everything is for the best); what kabbalah isn't (an easy path to the eternal bliss of enlightenment or a New Age philosophy); the ten fundamental forces that sustain the world; the four worlds the Kabbalists live in simultaneously; the three daily tasks of the Kabbalist; 39 different ways not to work on the Sabbath; and how to imagine an unimaginable God while praying.

Here's one of our favorite small bits in this treasure trove of information:

"Perhaps the greatest teacher of Kabbalah in the past 100 years was Rabbi Menachem Mendel Schneerson, known by millions of people around the world as the Rebbe (meaning great spiritual teacher) or the Lubavitcher Rebbe (Lubavitch is the town in Russia where his ancestors came from). The Rebbe encouraged the celebration of birthdays because a birthday is the anniversary of the soul's reentry into the world. On his birthday, a person should remind himself that the soul reincarnates and gets additional chances to complete its task; he should feel as though the world was created just for him. In addition, a birthday is a time to look at one's life with extra care and introspection and to resolve to work harder to fulfill one's task in the world." 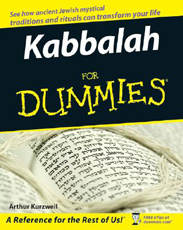