By Albert Nolan
An extraordinary book about the radical freedom of Jesus' spirituality which leads to unity with God, ourselves, others, and the universe.

Thirty years ago Albert Nolan wrote Jesus Before Christianity, a classic about the political context of Jesus' mission. In this stirring paperback, he looks at Jesus' spirituality and its relevance to our times. The author is a Dominican priest from South Africa. He outlines the signs of our times — the hunger for spirituality, the crisis of individualism, globalization, and developments in science after Einstein — to accentuate why we need the radical freedom of Jesus.

Nolan writes poignantly about the mysticism of the man from Nazareth — his experience of union with God as Abba — and how it was connected to his prophetic mission. This blend of spirituality and a passion for justice gives Christians a model to follow in daily life. The author is convinced that Jesus did not reject the law of the Torah, but relativized it with such statements as "The Sabbath was made for humankind, and not humankind for the Sabbath." The laws were intended to be of help to people but should not be worshipped in themselves.

Jesus was a revolutionary in other ways too; especially in challenging his disciples to move beyond the limitations of the blood family to the broader family of God's kingdom. Although he was radically critical of the world, he never singled out individuals for blame, condemnation, or hatred, no matter what they did. He was also a healer, an aspect of his ministry that Nolan thinks is very important.

Jesus demonstrated a path of personal transformation that we would do well to emulate today. His practice of silence and solitude led to an inner peace and tranquility. He saw himself and his mission clearly. He was grateful to God for all the blessings in his life. And he proclaimed that the child was for him a model of humility, trust, wonder, and playfulness. Although Jesus never used the word detachment, he exemplified it in his ability to let go and not cling to things, ideas, people, places, and tradition.

In the final section of this paperback, Nolan reveals the ways in which Jesus was practiced unity, an important element of living a sanctified life on earth. It is based on love:

"Jesus' whole life was an expression of this unconditional love. We saw how he reached out to all the individuals he met, whether they were rulers or beggars, saints or sinners. Every individual person is lovable, no matter how hypocritical he or she might be. Genuine love is always unconditional."

This practice of unity led to empathy with others, an ethic of sharing and generosity, and a radical freedom. For Jesus, freedom was not an end in itself but a means to complete service to God and others. Once we commit ourselves to the path of unity it will lead to great and wonderful things:

"God's Work sometimes appears to be very slow. Perhaps that is because we do not always appreciate the immensity of what we are involved in. Yet, precisely because it is God's Work, the future is secure. There is hope for the universe and for each of us as individuals. When I die, my ego, my false self, will be destroyed once and for all, but my true self will continue forever in God, the Self of the universe."

Jesus Today is an extraordinary companion work to Jesus Before Christianity. It celebrates the mysticism of his spirituality and shows how it leads to unity with God, ourselves, others, and the universe. 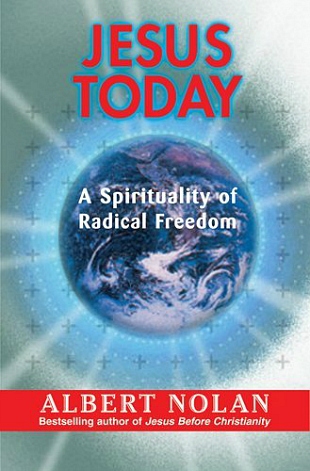