By Ruth Rimm
A beautifully designed interfaith work using the Gospel of Mark as a launch pad for meditations on a spirituality that is open, hosipitable, and flexible in its outreach.

This unusual book presents the Jesus Seminar's 1992 Scholars Version of the Gospel of Mark, a midrash that includes a celebration of all the wisdom traditions, an innovative text with bold and colorful designs, and a pathway to spiritual enlightenment that is in sync with our scientific, postmodern world. The imaginative person behind this daring interfaith work is Ruth Rimm, a young woman who by day teaches at an inner city school in the Bronx and by night is hard at work on further volumes in the Lost Spiritual World, all designed "to foster an environment of peace, love, empathy, forgiveness, tolerance, pluralism, inclusivity and reconciliation through beautiful artwork, inspiring commentary and fresh translations of the Scriptures of our great wisdom traditions."

We knew we were on the same wavelength with the author when she used the metaphor of the spiritual journey as a scuba diver since one of our favorite quotations from Ramakrishna is "Dive deeper." Then we nodded our heads when she quoted Thich Nhat Hanh: "We human beings can be nourished by the best values of many traditions." Rimm interweaves these quotations and others in and around the Gospel of Mark where Jesus evokes ecstasy and wonder in others, demonstrates the healing power of touch, sleeps at sea on a boat tossed by waves, acknowledges an important place for women in his life, tolerates the intolerant, practices loves and humility, and demonstrates a close connection and communion with God.

Rimm points out the many constrictions of a judgmental, literalistic, dogmatic, and harsh religion that is down on the world, science, and sex. She discovers good in all religions and refuses to accept one as superior to all the others. No wonder Rimm can commend the writer Raimon Panikker who had a Catholic mother, a Hindu father, and who studied first in America and then in India. He says: "I left as a Christian, found myself a Hindu, and returned as a Buddhist, without having ceased to be a Christian." That is a fine and commendable example of a new global spirituality that is at the heart and soul of The Lost Spiritual World: Mark. 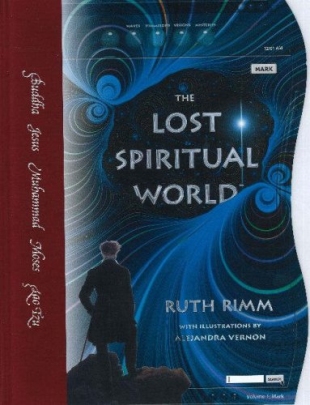