Barbara Kingsolver and her family move from Tucson, where every unit of food they consume has come there via a refrigerated module from somewhere far away. They settle into her new husband's farm in Virginia, which has a house, barn, orchards, and fields. The family agrees to deliberately eat food for a year produced in "the same place where we worked, loved our neighbors, drank the water, and breathed the air." Kingsolver laments the country's drift away from our agricultural roots. She notes that over the last decade, the United States has lost an average of 300 farms a week. She loves eating foods in sync with the seasons and especially loves the tomatoes of August.

Steven L. Hopp, her husband, is a professor of environmental studies. He contributes sidebars on a variety of subjects including the many dimensions of the local food movement. Her nineteen-year-old daughter Camille shares essays on nutritional information, recipes, and meal plans for each season. The kitchen becomes the hub of the home for Kingsolver's family.

This passionate work includes many insightful comments on the profit-driven mechanized food industry, the bug arms race that uses 985 million pounds of pesticides a year, the control of 98 percent of the world's seed sales by six companies, the meaning of the Slow Food Movement, and the value of markets and restaurants that only sell food produced by farms within an hour's drive. As you would expect from a writer of this caliber, Animal, Vegetable, Miracle: A Year of Food Life is an absolute delight to read. And the list of references and organizations at the back of the book is very helpful. 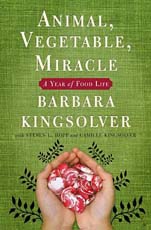