By Karen Lynn Williams, Khadra Mohammed
A touching and edifying account of the friendship forged between two young girls in a refugee camp in Pakistan

Workers in a relief truck in a refugee camp in Peshawar, Pakistan, throw a pile of clothing on the ground and the people rush forward to grab what they can get. Lina, a ten year-old girl, retrieves one sandal, and another girl, Feroza, finds its match. The two decide to share the sandals, each wearing them every other day. Both girls have suffered: Lina's father and sister were killed in the war in Afghanistan; Feroza's only living relative is her grandmother. Grief and memories of the past are heavy burdens for little girls to carry. That is why sharing is a gift of God that blesses them both.

This edifying and emotionally resonant book by Karen Lynn Williams and Khadra Mohammad salutes the courage and resiliency of refugees around the world, which now number 20 million people. The illustrations by Doug Chayka are perfectly attuned to the spiritual messages of the book, which is recommended for children ages 7 through 10. 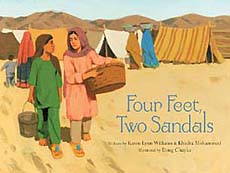