Phyllis Tickle is one of America's most beloved Christian scholars. Founding editor of the Religion Department at Publishers Weekly, she speaks widely and has written more than two dozen books. In this one Tickle has gathered all the sayings of Jesus from the first four books of the New Testament and the first chapter of the Book of Acts and arranged them into five categories:

In an introductory section, the author reflects on what she learned during the two years of this project of compiling and arranging the words of Jesus in the Bible. She ponders his five personas, his limited number of words in conjunction with his acts of healing, the large amount of energy given to talk about "the End Times," her own loss of images of Jesus while being absorbed with his words, the emphasis on the Jewishness of Jesus in his sayings, the differences in authority between his words and those of his inspired followers, and "the rugged grandeur" of all he said.

Tickle, who spent a lot of time and energy on the Divine Hours series of prayer manuals, suggests that readers approach the sayings of Jesus with caution:

"The Book of Sayings which follow here are not to be read in the same way as one usually reads a Bible. Narrative in form, the Bible's messages are packaged in the cushioning of verbal surrounds. Not so the Sayings. Lacking almost all of that protective pacing, the Sayings often exhibit the sleek starkness of a stiletto seeking a target. Those who enter them do well, therefore, to go in with prayerful heart and mind. Likewise, those who enter would do well to enter only one — rarely more than two — Sayings at a time. We Christians are fond of the term lectio divina, a medieval name for the practice of savoring a section of Scripture slowly, thoughtfully, prayerfully — for 'working' at it in small pieces, in other words. The practice of holy reading has never been more appropriate, however, than it will prove to be in studying the Sayings." 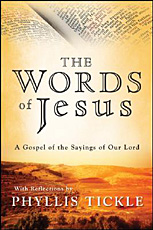