Habits of the Heart Individualism and Commitment in American Life

In 1831, a young French aristocrat, Alexis de Tocqueville, visited America and after traveling through the country for a year, returned home and wrote Democracy in America. Robert Bellah, professor of sociology at the University of California, Berkeley, regards this seminal volume as "the most comprehensive and penetrating analysis of the relationship between character and society in America."

The Frenchman identified individualism as a major factor in the changing culture of the nineteenth century. He defined it as "a calm and considered feeling which disposes each citizen to isolate himself from the mass of his fellows and withdraw into the circle of family and friends; with this little society formed to his taste, he gladly leaves the greater society to look after itself." Tocqueville was apprehensive about the future of democracy should each individual choose to stay "shut up in the solitude of his own heart."

In this very ambitious and complicated book, Bellah and his colleagues — sociologists Richard Madsen and Ann Swindler, philosopher Richard Sullivan, and theologian Steven Tipton — use Tocqueville's work as the starting point for a study of individualism and commitment in contemporary American society. Habits of the Heart sets out to identify "what resources Americans have for making sense of their lives, how they think about themselves and their society, and how their ideas relate to their actions."

From 1979 to 1984, the authors interviewed 200 white middle-class Americans, trying to ascertain how these individuals found meaning in the private and public dimensions of their lives. Special attention was paid to their understandings of the meaning of freedom, the nature of success, and the requirements of justice in the modern context. Following a rich sociological tradition, the authors then delineate four representative character types: the independent citizen, the entrepreneur, the manager, and the therapist. All wrestle with individualism expressed in two modes: the utilitarian and the expressive.

Beginning with his section on "Private Life," Bellah and his associates reflect upon the means by which Americans fashion independent and autonomous selves. The first step of "finding oneself" is to separate from family by leaving home. Another avenue is pulling away from the traditional religious community to follow one's own private faith. At work, the ancient ideal of a "calling" is replaced by the modern concept of a profession where impersonal standards of excellence are emphasized. The closest these individuals come to community are in "lifestyle enclaves" bringing together like-minded people of the same socio-economic class.

Those who find meaning via this extreme brand of individualism bypass other substantive American traditions for the grounding of the self, including the biblical view of a just and compassionate society and the moral philosophy of republican citizenship.

Using the therapeutic model of what it means to be a healthy and rounded human being, many have turned love and marriage into just another area for personal growth. Here feeling good about oneself becomes all important. The contractual arrangement of couples stands and falls depending on whether or not there is "empathetic communication, truth-telling, and equitable negotiation." Self-fulfillment overrides the ethic of commitment, and the intimacy of love and marriage is subject to the whims of individualism.

The quest for self-reliance and autonomy has become so exaggerated in contemporary America that even the traditional bonds with others in work, love, and community are slighted. Bellah and his colleagues are convinced that "a minimum of public decency and civility is a precondition for a fulfilling life." Sadly, raw individualism has diminished the nurturing potential of these private precincts of life.

The focus of the second part of Habits of the Heart is "Public Life." The authors note that Tocqueville's belief that citizens active in civic organizations would be the best hope for sustaining freedom and enriching the life of the republic.

Citizens can work for the betterment of society on a local level, but it is hard for Americans to envision what contributions they can make to the nation at large due to conflicting images of the public good. Bellah and his colleagues outline these images as establishment versus populism, neocapitalism versus welfare liberalism, and the administered society versus economic democracy. Religious communities can make an important contribution to the modern scene by clarifying that "individuality and society are not opposite but require each other." A spiritual understanding of reality entails a prophetic critique of the imperial self.

Since the founding of America, the idea has persisted that at least some of the people some of the time ought to be able to rise above personal interest and work for the well-being of society as a whole. The Civil Rights Movement is held up by the authors as a good example of such public service. There are numerous other opportunities for citizens to work for worthwhile causes such as peace, social welfare, and racial harmony.

Individualism has long been a part of American idealism but so has the vision of a helping and caring society espoused by biblical and republican traditions in the early days of the Republic. Bellah and company call for a revivification of these traditions as an antidote to selfish individualism and the ethic of materialism. They present the lineaments of a "new social ecology" based on community and commitment to restore meaning to work, legitimacy to politics, the significance of living tradition to education, and the impetus to civic activism.

Habits of the Heart is an ambitious sociological work. It offers a stimulating summary of Tocqueville's portrait of America; a wide-ranging and in-depth survey of contemporary attitudes toward self, family, work, religion, and politics; and a provocative blueprint for a social ecology which is both respectful of the past and forward looking. The dialogue on the meaning of private and public life in contemporary America begun by Bellah and his colleagues should continue with discussion of this book by schools, universities, churches and synagogues, and community organizations. 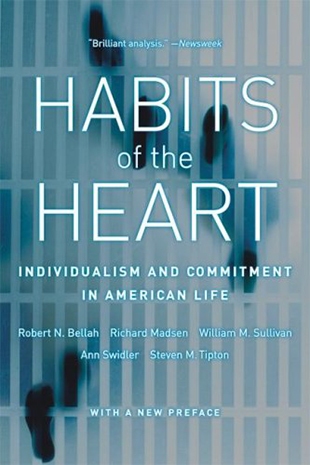