By Michael Carroll
Buddhist meditation presented as a catalyst to mindful leadership at work.

Michael Carroll worked for 25 years on Wall Street and in the publishing industry; he is the author of Awake at Work. He is a longtime student of Buddhist meditation and an authorized teacher in the lineage of the Tibetan master Chogyam Trungpa.

In this bold and revealing work, Carroll delves into the relevance of meditation to the workplace and the dynamics of leadership. In a chapter titled "Opening Up to Workplace Realities," he looks at the contrast between the "top-down" leadership of business where the milieu is one of a pressure-cooker versus leadership from the inside where the emphasis is upon bringing out the best in everyone. One of the qualities behind the latter, mindful leadership, is a vulnerable openness, which the Tibetan Buddhists call jinpa, complete generosity. It means giving ourselves to others without "making ridiculous demands or placing lids on situations."

Opening up is just the beginning step. We must also set aside our self-deceptions that stem from arrogance, aggression, and fear. They include chasing false hopes, giving in to the traps of blame and praise, living under the illusion of security, and continuing in stale routines. Carroll believes that the regular practice of mindfulness meditation can generate ten leadership principles: simplicity, poise, respect, courage, confidence, enthusiasm, patience, awareness, skillfulness, and humility. Cultivating these principles on the cushion can lead to further competencies that create health and well-being in organizations, such as building trust, eliminating toxicity, sending clear messages, and healing wounds.

Carroll contends that a mindful leader demonstrates an inner authenticity that comes across in four marks: elegance, command, gentleness, and intelligence. The final chapter contains some "Practices and Exercises" for cultivating mindful leadership. We were very impressed with "The Thirty Reminders of the Mindful Leader" inspired by the teachings of the Tibetan master Gyalsay Togme Sangpo (1295 -1369).

Try a Spiritual Practice on Attention 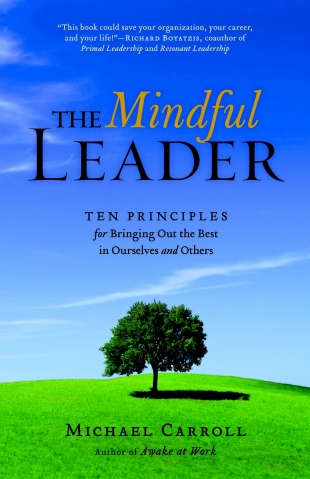