By Joan Chittister
An inspiring and encouraging salute to the great spiritual adventure of aging and being an elder.

The great adventure of growing older and being an elder is the chance to deepen and enrich our spirituality. Whereas we can find examples of this in the medicine men and women of indigenous cultures and in the seers of Judaism, Hinduism, Buddhism, and other religious traditions, wise old souls are rarely depicted in Western movies and television programs. Usually old people are portrayed as frail, bumbling, or silly. People grow up assuming that they will literally be over the hill with nothing to look forward to once they pass the retirement age. Joan Chittister, who has written many books lamenting what's missing in American society, now turns her attention to the sad consequences of stereotypes about aging. She posits a different and very inspiring portrait of the gifts, not the lacks, of years.

Chittister, now in her 70s, has been a nun for 50 years and is the author of more than 35 books, a weekly columnist for the National Catholic Reporter, the founder and current executive director of Benetvision: A Resource and Research Center for Contemporary Spirituality, and co-chair of the UN-sponsored Global Peace Initiative for Women. We have profiled her in our Living Spiritual Teachers Project. She is a member of the Benedictine Sisters of Erie, Pennsylvania, where she has served as prioress of the community for 12 years. Anyone who has heard Chittister speak or teach knows that she is a dramatic icon of the zeal that can come from a long life of meaning, passion, and commitment.

At a lecture in New York City in late April, Chittister told the funny (and not-so-funny) story of asking a store clerk for a battery charger for her iPhone. The twentysomething man just stared at her, so she repeated what she needed. Finally, he said, "Lady, you have an iPhone?" The message was pretty clear. He thought she was too old to have the latest technology, associated with people who are up and about in the world and need to stay connected with lots of people. We at the lecture had a good laugh over this, but at the same time, we agreed when Chittister added that it was a laugh that was accompanied by a "stab in the psyche." When we see elders as static people, rather than constantly developing ones, we do them and ourselves a great disservice.

The author describes the last stage of life as "the capstone years, the time in which a whole new life is in the making again." She adds: "The gift of these years is not merely being alive — it is the gift of becoming more fully alive than ever." In this energetically presented book, she sets out to show us how.

First, she helps us reframe what growing older in the United States today really means, according to the latest statistics and research findings.

• Decrepitude and incapacitation that come with age are, on average, only about the last three months of life. Even then, mental clarity is more likely to remain to the end. "Clearly, life does not end till it ends."

• Only 5 percent of those over 65 are in special-care institutions, and 80 percent of the rest of the older population have no limitations in managing the rigors of daily living.

• Old age is no longer a custodial care proposition. "Grandma does not 'live in' anymore. She is far more likely to live alone, in her own home or apartment, drive a car into her eighties, and volunteer at the library."

• Old brains are no less intellectually competent than young brains. "Scientists have discovered that older people, while not as quick computationally as younger people, do think just as well as the young, but differently — with more depth, with more reflection, with more philosophical awareness."

Living life to the fullest means active aging, and one thing that can make the difference between health and unhealthy aging is lifelong learning. According to the Harvard University Longitudinal Study of Adult Development, continued learning determines "the degree to which life will be satisfying to us, as well as the degree to which we will be interesting, valuable, life-giving to others." Learning projects that keep elders' minds active also expand their horizons and give them opportunities to be in community with others on retreats, study groups, or in online e-courses.

In a series of short, bright, and snappy chapters, Chittister provides a tour of other elements of growing older gracefully. She is convinced that only the old can make this journey into an adventure, a sweet spot in time that abounds with pleasure:

"Old age is not when we stop growing. It is exactly the time to grow in new ways. It is the period in which we set out to make sense of all the growing we have already done. It is the softening season when everything in us is meant to achieve its sweetest, richest, most unique self."

Here are a few of the subjects she covers in the book:

• The challenges of dealing with regret, one of "the ghosts of aging."
• Learning to cope with the fear of weakness.
• The joy of accepting mystery rather than trying to control everything.
• The opportunity to savor relationships as "the alchemy of life."
• The chance to immerse ourselves in the present moment since we are no longer so driven.
• Aloneness as "the monastery of the elderly."
• The leisure to harvest our memories.
• Forgiveness as a blessing of the later years.
• The gift of time to consider the legacy of our lives.

This is also a time of life when we have the leisure, like Mary the mother of Jesus, to ponder things in our hearts and to think with more philosophical awareness.

Chittister addresses not only those who question the opportunities of the later years; she also issues a challenge to elders. If elders do not make their old age a productive time, they risk wasting a good 25 - 35 percent of their lives. At the same time, they have a responsibility to model this stage of life for those who are younger.

Chittister peppers her message with encouraging words. One gift of years is the additional time to be of service and to fulfill a life purpose. This may mean playing a greater role as a co-creator of the world through projects for the general welfare. It may mean exploring ethical choices more deeply and bringing our experiences to bear on the challenges facing our communities. "A blessing of these years," she writes, "is to have the time to complete in ourselves what has been neglected all these years, so that the legacy we leave to others is equal to the full potential within us." This is a deeply spiritual quest, and Chittister makes a fine guide. 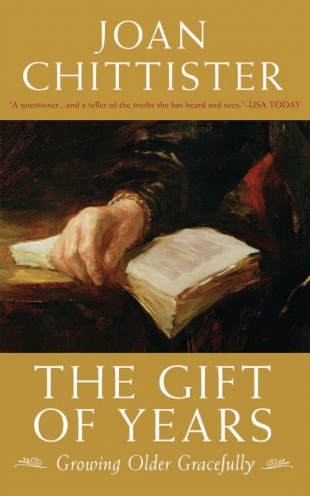