Why the Dalai Lama Matters His Act of Truth as the Solution for China, Tibet, and the World

By Robert Thurman
A bold and visionary book about the peaceful and hopeful role that the Dalai Lama can play in resolving the conflict between China and Tibet.

Robert Thurman has dedicated his life to the study and preservation of Tibet's spiritual and cultural heritage. He is cofounder of the Tibet House US, the Jey Tsong Khapa Professor of Buddhist Studies at Columbia University, translator and author of several key works on Tibetan literature and analysis, and the first American ordained as a Tibetan monk. In this bold and visionary book, he draws upon his 45-year friendship with His Holiness the Dalai Lama to present a rich and deep overview of the life, work, and spiritual perspectives as this peace maker, champion of Buddha's wisdom, lover of science, practitioner of the religion of kindness, and explorer of interfaith meaning.

Thurman believes that this charismatic and influential Tibetan monk holds the key to resolving the 50-year conflict between China and his small country at the top of the world. As a walker on the Middle Path and an architect of the inner revolution of consciousness that has been simmering in Tibet for 3,000 years, the Dalai Lama brings positive energy and hope to a world weary of conflict, the reign of fear, and the old global paradigms of militarism and colonialism.

The Dalai Lama has outlined his "Three Main Commitments in Life":

1. As a human being, to promote common human values, tolerance, compassion, and so on.
2. As a religious practitioner, to promote world religious harmony, Buddhist self-discipline, and so on.
3. As a Tibetan, to represent his people until oppression by China is solved, then retire from politics even in future incarnations and revert to being a spiritual teacher in Drepung, his traditional monastic university.

Thurman takes these foundations and expands upon them with seven more levels and kinds of impact the Dalai Lama has as:

Along the way, Thurman discusses the Dalai Lama's view of Buddhism as one-third ethics, one-third psychology and religion as therapy, and one-third scientific wisdom; his grounding of a secular, humanistic, and environmental ethic in kindness; his exploration of various Buddhist scientific theories of mind and body; his espousal of nonviolence no matter how bad the oppression; his tireless championing of interreligious dialogue and mutual understanding; his speaking up for the Tibetan people to the world; his offering to accept autonomy within China rather than the full independence that Tibet deserves under international law; and his advocacy of the sameness of all human beings and all living beings as his first principle as a philosopher, scientist, and enlightened teacher.

The book includes many quotations from the Dalai Lama. Here is one:

"Dialogue is the only sensible and intelligent way of resolving differences and clashes of interests, whether between individuals or nations. The promotion of a culture of dialogue and nonviolence for the future of humankind is a compelling task of the international community. It is not enough for governments to endorse the principle of nonviolence without any appropriate action to support and promote it. If nonviolence is to prevail, nonviolent movements must be made effective and successful. Some consider the twentieth century a century of war and bloodshed. I believe the challenge before us is to make the new century one of dialogue and nonviolence."

The Dalai Lama also sees the spiritual practices of compassion and generosity as having direct relevance to the growing gap between the rich and the poor:

"We watch, hear, and read every day about breathtaking manifestations of affluence alongside deaths due to starvation, poverty, malnutrition, and preventable or curable diseases. Shouldn't we ask ourselves whether something is wrong with our choice of goals or our motivation, or both? I believe we have to find ways of bringing compassion to bear in our economic activity."

In the closing chapters of the book, Thurman outlines an inventive and realistic path to resolving the present-day conflict between China and Tibet. He lays out five steps that can be taken by China and five by the Dalai Lama; this is followed up by a discussion of challenges to implementing the process. Perhaps the most innovative idea of all is to establish Tibet as a nature preserve since the small country is Asia's water tower with ten of the major rivers of the region originating there. In the Afterword, the author concludes with "Ten Points of Hope." The last of these is:

"Therefore, it is our duty and obligation to cultivate hope. We can free our imaginations from being stuck in the expectation of failure. We can free any enemy from expecting that he or she cannot become a friend. We can follow the Dalai Lama and never give up. We live in hope, as the realistic way to live. We live therefore without bitterness, joyfully and happily, while opposing violence and injustice. It is our duty to strive to live so happily, that even if someone kills us, we will die happy!" 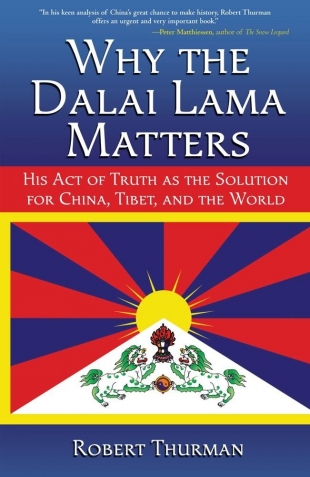