By Joan Halifax
An extraordinary collection of teachings, personal stories, meditations and spiritual practices on being with dying.

Joan Halifax is an anthropologist and Zen priest who in 1994 founded the Project on Being with Dying which has trained hundreds of health care professionals in the contemplative care of dying people. For 40 years, she has lectured on the subject of death and dying at various medical schools and academic institutions. In 1990, Halifax founded Upaya Zen Center, a Buddhist study and social action center in Santa Fe, New Mexico. This extraordinary book brings together her teachings, personal stories, meditations, spiritual practices, and wise counsel on her work with people at the end of their lives. It is addressed to those who are dying and their caregivers. Halifax notes at the outset:

"In many spiritual teachings, the great divide between life and death collapses into an integrated energy that cannot be fragmented. In this view, to deny death is to deny life. Old age, sickness, and death do not have to be equated with suffering; we can live and practice in such a way that dying is a natural right of passage, a completion of our life, and even the ultimate in liberation."

The author has adopted three tenets in her work with dying people that have been promoted by Roshi Bernie Glassman of the Zen Peacemaker Order as a basis for peacemaking. "Not-knowing" challenges us to give up fixed ideas and to be open to what is within and around us. "Bearing witness" calls us to honor both the suffering and the joy in the world without judgment. "Compassionate action" commits us to free others and ourselves from suffering. When we face death, we move into unknown waters, and this is a time when we should be alert to the vastness of our own being and the mysteries that lie ahead of us. Halifax shares a story which illustrates this process:

"Years ago I spent time with an old Tibetan lama who seemed to be rejoicing as his death approached. I asked him whether he was happy because he was old and ready to die. He replied that he felt like a child who was returning to his mother. All his life had been a preparation for death. He told me that his long preparation for death had actually given him his life. Now that he was about to die, he would finally open his mind to its true nature."

Halifax covers a lot of territory as she teaches us ways to contemplate the transformative power of death: working with what St. John of the Cross called "the lucky stuff " that accompanies suffering; the heart of meditation and silence; the role of radical optimism; dwelling in the boundless abodes; realizing impermanence and selflessness; fictions that hinder and heal; coping with pain; transforming poison into medicine; communities of care; finding meaning; forgiving, reconciling, and expressing gratitude; caring for the body after death; and the plunge of sorrow.

Throughout the book, Halifax sprinkles spiritual practices and meditations on a variety of topics including mercy, considering our priorities, the nine contemplations, giving and receiving through tonglen, boundless caring, four profound reminders, walking meditation, encountering death, charnel ground meditation. and grief. Here is an example of one of these titled Boundless Abodes for Dying:

"May I accept my anger, fear, and sadness, knowing that my heart is not limited by these feelings.
May all those I leave behind be safe and peaceful.
May I remember my consciousness is much vaster than this body as I let go of this body.
May I be open to the unknown as I leave behind the unknown.
May I live and die in ease." 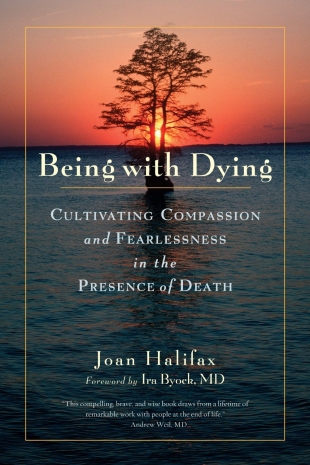