By Martin Prechtel
An engaging testament to the stout-heartedness of the Mayan sacred tradition.

After spending 13 years in a Mayan village in Guatemala, Martin Prechtel obeyed his Tzutujil mentor who told him to return to the United States to preach and teach the good news of the indigenous soul. This incredibly engaging spiritual memoir, which Robert Bly calls "a great encyclopedia of beauty," is a complex testament to the stout-heartedness of the Mayan sacred tradition.

Prechtel was raised on an Indian reservation in New Mexico. A series of dreams led him to Santiago Atitlan, the Mayan village that became his spiritual home. The renowned shaman Nicolas Chiviliu Tacaxoy there told him he had been sent by the spirits to get his soul "cooked" and to train up his power so he could become "an advocate of the village heart." With lyrical passion, Prechtel writes about the Mayan love of the natural world, the eloquence of their language, the significance of ceremonial clothing, the use of rituals as "memory feasts," the importance of dreams, and the great respect given elders.

There is drama in the author's descriptions of his initiation as a shaman, a calling he sums up as being "a fix-it person" and "a spirit dog catcher." Since the traditional Mayan way described in these pages has been decimated in Santiago Atitlan by a violent civil war and the spread of Christian fundamentalism, Prechtel now tries to keep these values alive by bringing to the fore what is "indigenous, natural, subtle, hard to explain, generous, gradual, and village-oriented in each of us." When you have finished this remarkable book, pass it on to a friend so the indigenous soul can keep moving with all of its lively juices intact. 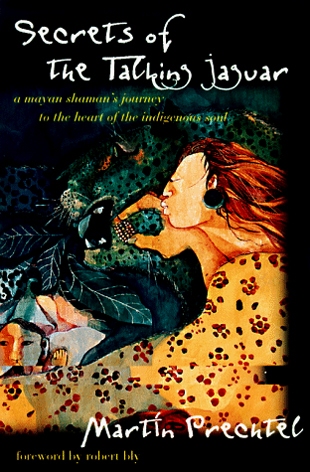