By Calvin Malone
A prisoner's stories of practicing Buddhism in prison where silence, kindness, non-harming, and compassion are in short supply.

Calvin Malone went to prison in 1992 with a 20-year sentence for aggravated assault. He began practicing Buddhism soon after he was incarcerated. He has found this environment to be a place where he can do Dharma practice. Malone challenges us to imagine living in a 60-square-foot room with one other person. A cellmate is called a celly, and the author has had 49 of them since he entered prison. When two people are confined to a bathroom-sized space, they are forced to spend more time together than parents spend with their children or couples spend with each other. Malone writes about the prison mentality of "the strongest survives" and how it keeps most inmates from helping each other. He shares stories of individuals who have given him the chance to practice listening, kindness, and compassion. Others have offered him wise counsel.

Every part of his day, Malone notes, is an open invitation for quiet reflection and mindful awareness. He has transformed his life through Buddhist practices — meditation and lovingkindness. Malone believes that prisons encourage recidivism rather than education. The races assemble with their own, and the milieu of inactivity serves as a seedbed for fear, despair, and anger. Still, he is convinced that the prison population is changing from the hardcore convict to "a more docile group of people just trying to get by each day." This includes drug addicts, dealers, and the mentally ill. Malone's Buddhism has enabled him to see all those he comes in contact with — the guards, the hate-mongers, the racists, the thugs, those he likes and those he dislikes — as spiritual teachers. 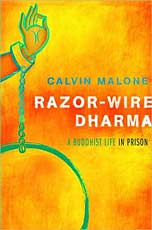