By Robin R. Meyers
Calls for a radical change in churches by putting the faithful on the path of Jesus and seeing Christianity as compassion, not condemnation.

Robin Meyers is the pastor of the Mayflower Congregational Church in Oklahoma City. He is also a tenured professor in the Philosophy Department at Oklahoma City University, a syndicated columnist, a peace activist, and an award-winning commentator for National Public Radio. Meyers writes regularly for The Christian Century and is the author five books including The Virtue in the Vice.

"After centuries of being told that 'Jesus saves,' the time has come to save Jesus from the church," writes the author, who has way with words and is known for creating memorable phrases. Meyers calls for a radical change in churches — putting the emphasis on discipleship rather than doctrine:

"Christianity as a belief system requires nothing but acquiescence. Christianity as a way of life, as a path to follow, requires a second birth, the conquest of ego, and new eyes with which to see the world. It is no wonder that we have preferred to be saved."

Christians, Meyers continues, have lost an appreciation for the richness of faith which goes way beyond a set of beliefs about the Bible, Jesus as Savior, and the sinfulness of all people. There is also faith as radical trust in God, as loyalty in one's relationship to God, and as a way of seeing creation as gracious.

Meyers is sure to stir up controversy with his assessments of the cross (as futility, not forgiveness), Easter (as presence, not proof), the human condition (as original blessing, not original sin), Christianity (as compassion, not condemnation), discipleship (as obedience, not observance), justice (as covenant, not control), prosperity (as dangerous, not divine), and religion (as relationship, not righteousness).

Near the end of the book, the author sums up the necessity of breaking Jesus out of the stained glass window and incarnating his love, compassion, hospitality, and action for justice. He then makes this thought-provoking observation:

"Perhaps the time has come for all of Christendom to sit at the feet of the Quakers and the Mennonites again. Perhaps we should all try to emulate the Friends and other nonviolent groups like them and practice simplicity and integrity as a lifestyle, not just as a politically correct sentiment. I have come to believe that of all those attempting to recover the essence of New Testament Christianity, the Quakers may have been the most faithful to the wisdom of Jesus. Believing that everyone has the ability to experience the love and leadership of God and that no ecclesiastical authority has to mediate or direct that experience, they live and act in ways that seek to remove anything that fosters pride or compromises one's relationship to God — wealth, striving after success, or fashionable dress." 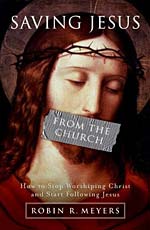