By Robert Wuthnow
Examines the expansion of American churches into new areas of involvement around the world.

Robert Wuthnow is the Gerhard R. Andlinger '52 Professor of Sociology and Director of the Center for the Study of Religion at Princeton University. He is the author of many books including After Heaven: Spirituality in America Since the 1950s. He notes that Christians make up about 80 percent of the total U.S. population and that "Christianity is an evangelistic religion whose adherents believe variously in sharing their faith and putting into practice the ethic of love expressed in the life of Christ." The research for this book consists of information from a nationally representative survey of 2,231 members of local churches and in-depth qualitative interviews with 300 pastors, church leaders, and members who had been involved in transnational ministries.

The globalization of American Christianity represents a new phase in the history of American religion. Spending by churches on overseas ministries has risen to $4 billion annually; the number of full-time missionaries serving abroad has increased steadily; almost every international faith-based relief and development agency (World Vision International, Catholic Relief Services, the Salvation Army) has expanded dramatically; and a majority of U.S. congregations are currently involved in overseas ministries — through special offerings for humanitarian causes, supporting missionaries, hosting foreign speakers, forming committees, and sending out volunteers.

All of this global emphasis within American churches comes at a time when Christianity is growing by leaps and bounds in the Southern Hemisphere and declining in western Europe and the United States. Wuthnow discusses the four faces of globalism, the evolution of transnational ties (including the rise of denominational boards, the emergence of independent agencies, the era of Faith-Based NGOs,) and the global role of congregations (humanitarian assistance, sponsoring missionaries, peacemaking, and advocacy for religious freedom) In a chapter on Faith and Foreign Policy, the author focuses on the complications involved in the Christian community's attempt to influence international issues. 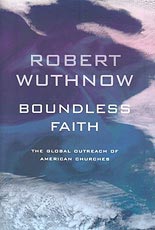