By Kerry Lee MacLean
A salty, satisfying, and clever children's parable about meditation as a wise and effective anger management tool.

Anger is rampant everywhere with more and more people actively expressing their frustration and disappointment with the way things are going and the inequities behind their current situation. Add to that the daily indignities that stem from our uncivil society and you have perfect storm of rage. People also tend to believe that it is purgative to vent your anger and that by releasing it, we can experience satisfaction. Of course in the process, we put pressure on our bodies, minds, and souls and spread the toxins around to others.

Peter, a cow, earns the nickname Moody Cow after experiencing "one stupid rotten day when everything went wrong." It begins with a bad dream about a giant three-eyed alien and goes downhill from there when his sister draws on his brand-new skateboard, he is forced to ride his bike to school in the snow, and on the way home he scrapes his knee and crashes into his father's truck. In response to such a terrible day, he explodes in anger, throwing his baseball through the window of his home.

Peter, now called Moody Cow by everyone in the neighborhood, meets with his wise grandfather teaches him about meditation using a Mind Jar. For every angry thought, he is invited to put a inch of sparkles in the jar of water. This exercises shows him the futility of venting anger and the value of naming it and observing how it can settle down into peace and silence.

All children, like adults, have moody cow days. This salty, satisfying, and clever book points to meditation as an effective tool for dealing with anger. Meditating with the Mind Jar even becomes a daily practice for Peter and his grandfather. 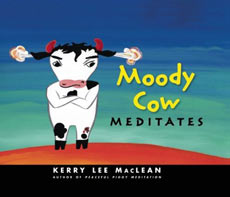