Circling the Sacred Mountain A Spiritual Adventure Through the Himalayas

By Robert Thurman, Tad Wise
Thurman has many cogent things to say about Tibet, happiness, the yoga of positive seeing, suffering, liberation, and the future of the planet.

In this spiritual adventure, Robert Thurman, author of Inner Revolution, leads a band of nine pilgrims on a journey to Tibet where they circumnavigate Mount Kailash, the 18,600 foot "spiritual crown of the planet," in the very northernmost sector of the Himalayas. He shares his account of the saga with Tad Wise, a novelist and former student of his at Amherst College in the 1970s. "Buddha Bob," as he was affectionately called back then, describes this Dharma trip (both inward and outward) as "a no-holds-barred, leap-into-the-abyss kind of journey."

Thurman, now professor of Indo-Tibetan Studies at Columbia University and the cofounder of Tibet House New York, gives the group his commentary on The Blade Wheel of Mind Reform, an ancient text that describes the bane of self-centeredness and the blessings of sound self-esteem, compassion, and altruism. He believes that the teaching of selflessness is the Buddha's greatest gift to the world. Thurman has many cogent things to say about Tibet, happiness, the yoga of positive seeing, suffering, liberation, and the future of the planet. 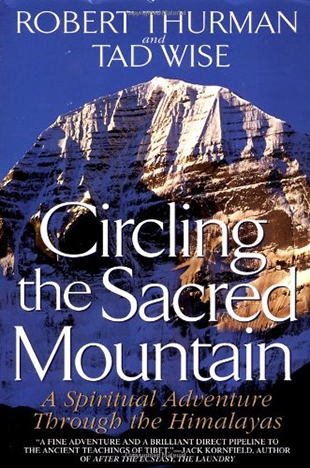