By Harold S. Kushner
A mature spiritual perspective on coping with the many fears of life.

Anxiety is the number one health problem in the United States, and it can lead to depression, alcoholism, eating disorders, prescription drug addiction, and other maladies. Fear plays frequently on our inner television channels and we often have a hard time distinguishing between real fears and exaggerated or imaginary ones. The media, marketers, and politicians manipulate our fears. In hard times, we worry about money, debt, losing our jobs, or having our houses foreclosed. And as Rabbi Harold Kushner states in his twelfth book, "To love someone is to make yourself a hostage to fortune, aware of all the terrible things that can happen to him or her."

Kushner refers to the wonderful movie Defending Your Life where a man in the afterlife is forced to watch reruns of crucial moments in his life in order to see whether he learned to conquer fear. Most of us spend a lot of time dealing with this crucial emotion which hovers in our consciousness under many guises. In this ambitious work, Kushner, one of our Living Spiritual Teachers, takes on the fear of terrorism, of natural disaster, of rapid change, that humanity will destroy itself, of rejection, of growing old, of death. The frontispiece quote is from Mark Twain: "Courage is not the absence of fear but the mastery of fear."

In his essay on terrorism, Kushner wisely makes it clear that any religion that aspires to be seriously looked at in the twenty-first century will have to eschew violence in the name of God as compassion. All of us will have to accept the idea that innocent civilians around the world will suffer at the hands of terrorists no matter what is done to make things safer. People will also continue to suffer because of earthquakes, floods, fires, and famines. Blaming God is out of the question: it makes much more sense to accept guilt and responsibility ourselves for creating conditions that have contributed to these situations.

As millions of Americans are discovering, losing one's job or no longer feeling loved are two of the most devastating fears. Both involve a sense of failure and of being rejected. It is hard to heal these wounds. The stress that comes with drastic change unsettles many people and they are often swamped by feelings of helplessness and hopelessness. Kushner offers his slant on this challenge as well as ideas on how to cope with fears about the end of the world as we know it. He also ponders the many meanings attached to the fear of getting old and the fear of death. He quotes Ernest Becker: "Of all things that move men, one of the principal ones is the terror of death. . . . It is the basic fear that influences all others, a fear from which no one is immune."

In the closing chapter, Kushner points out the wrong-headedness of religions which admonish people to be frightened of God. A more realistic and balanced approach is to be in awe God's glory, power, creativity and love. The author celebrates courage as a virtue which means "looking fear in the face and refusing to be intimidated." Conquering Fear by Harold Kushner is a profound work that stretches our minds and souls. 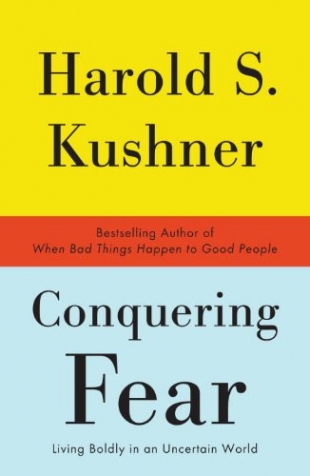