By Joan Konner
A smorgasbord of juicy quotations on emptiness, nothingness, silence, and more.

Joan Konner conceived and edited The Atheist's Bible, which became a national bestseller in 2007, and she produced the PBS documentary The Mystery of Love. She is Dean Emerita and Professor Emerita of the Columbia Graduate School of Journalism, as well as the former publisher and currently an honorary co-chair of the Columbia Journalism Review. This is her second book and it is brimming with a juicy and wide-ranging smorgasbord of quotations from artists, mystics, musicians, poets, philosophers, playwrights, scientists, and comedians.

As she explains in the introduction, we in the West have had a hard time with the paradoxical notion that "Nothing exists." It is only recently that our cultural curriculum has made a place for both/and or holistic thinking. For centuries, Taoists, Zen Buddhists, and Tibetan mystics have talked about emptiness, nothing, and the value of silence. One of the first quotations in the book is from Edmond Jabes: 'The void is waiting for vocabulary." Konner lists words for nothing from A to Z: "among them are bupkis, emptiness, nada, naught, nirvana, the void, vacuum, zip, zero, and zilch."

In a section titled "In the Stacks," the editor highlights multiple quotations from Samuel Beckett, Italo Calvino, E. M. Cioran, Thomas Merton, Rumi, and William Shakespeare. We'd like to single out some quotes about silence to give an example of the high quality of the material in You Don't Have to Be Buddhist to Know Nothing:

• "Silence is not the absence of sound. It's a physical place, a destination with value and meaning in a chaotic world, somewhere arrived at with difficulty and left with regret."
— Kenneth Turan

• "Silence, a medium I enter and feel around and inside me, an affirming vital presence always, whether or not I'm conscious of it."
• John Edgar Wideman

• "After silence that which comes nearest to expressing the inexpressible is music."
• Aldous Huxley

• "I've begun to realize that you can listen to silence and learn from it. It has a quality and a dimension all its own."
• Chaim Potok

• "Can you feel the silence?"
• Van Morrison

• "Experience teaches that silence terrifies people the most."
• Bob Dylan 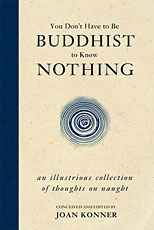